Even though college, credit-card debt weigh them down 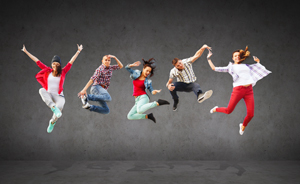 June 11, 2018 —Â OMAHA, Neb.–(BUSINESS WIRE)–Millennials are optimistic about how their lives will play out after college, despite the fact that they have a collective $1 trillion in student loan, credit card and other debt hanging over their heads, according to the TD Ameritrade 2018 Millennials and Money Survey.

âMillennials are graduating at record rates, and itâs great to see that like most previous generations of college students, young people are optimistic about the future. On average, survey respondents expect to land a job in their chosen field and be completely financially independent by age 25,â notes JJ Kinahan, chief strategist for TD Ameritrade. âThis is a financially optimistic group thatâs feeling positive about the economy, the job market and their own plans. However, they will need to develop saving and investing habits that will help them reach some pretty big goals.â

âMillennials are a generation that has vastly different attitudes and habits than previous generations. So naturally, their lives and financial milestones after college may look different as well,â explains Kinahan. According to the survey:

Planning to Retire Early or Not At All

âOne of the greatest investments young people can make in themselves is to start putting money away in their 20s. Because of the power of compounding (Einstein called it the eighth wonder of the world), even with ups and downs along the way, those who start early potentially can end up with more in the end,â explains Kinahan. âIdeally, it would be wise to start right after college, and while some millennials certainly do that, we realize thatâs not always possible. Understanding all of the available alternatives, like employer-sponsored retirement accounts or brokerage accounts, can be a step in a right direction. And, if youâre not sure, talk to someone. The sooner you can get started, the better your financial prospects may be.â

Consider this example of someone who begins investing $5,000 a year at age 22 and continues to put that amount of money away until they retire at 67, earning an assumed 6 percent return. Theyâd end up with twice the money as an investor who did the same thing starting at age 32. It could mean the difference between retiring with half a million dollars versus retiring with $1 million, according to a New York Times analysis1. Thatâs the power of compound returns.

Many millennials are making strides and overall, more rate themselves as savers than did in 2016 (70 percent versus 62 percent). Ninety-four percent of millennials said they are saving towards a specific goal â vacation (43 percent) and emergency fund (39 percent) being the top choices.

One of the greatest investments young people can make in themselves is to start putting money away in their 20s, because of the power of compounding (Einstein called it the eighth wonder of the world)

Kinahan offers some financial tips for millennials who may need to look at additional financial strategies to pursue their goals:

The investment process does not eliminate the risk of experiencing investment losses.

Past performance is no guarantee of future results or investment success.

About TD Ameritrade Holding Corporation
TD Ameritrade provides investing services and education to more than 11 million client accounts totaling $1.2 trillion in assets, and custodial services to more than 6,000 registered investment advisors. We are a leader in U.S. retail trading, executing an average of more than 940,000 trades per day for our clients, nearly a quarter of which come from mobile devices. We have a proud history of innovation, dating back to our start in 1975, and today our team of 10,000-strong is committed to carrying it forward. Together, we are leveraging the latest in cutting edge technologies and one-on-one client care to transform lives, and investing, for the better. Learn more by visiting TD Ameritradeâs newsroom at www.amtd.com, or read our stories at Fresh Accounts.

About the Millennials and Money Survey
A 15-minute online survey was conducted with 1,519 American millennials ages 21 to 37 by Head Solutions Group between February 21 and March 7, 2018, on behalf of TD Ameritrade Holding Corporation. The statistical margin of error for the total sample of N=1,519 American millennials within the target group is +/- 2.5 percent. This means that in 19 out of 20 cases, survey results will differ by no more than 2.5 percentage points in either direction from what would have been obtained by the opinions of all target group members in the United States. Sample was drawn from major regions in proportion to the U.S. Census.