Are middle-class retirees paying the price? 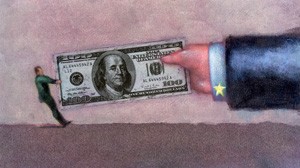 While the legislationâs sponsors claim it is targeted at âunproductive and speculativeâ trading, the Wall Street Tax Actâs financial transactions tax (FTT) on the sale of stocks and bonds apparently includes those held within the trillions of dollars of retirement savings invested in mutual funds and collective investment trusts by pensions and 401(k)s.

âEvery week millions of Americans sacrifice to set aside part of their hard-earned pay for retirement, investing those savings to help provide a secure financial future,â Graff explained. âAfter years of attacking 401(k) plan fees, some members of Congress now want to charge 10 basis points every time a hard-working American contributes out of their pay into their 401(k). And then charge another 10 basis points every time the account is rebalanced. And then, another 10 basis points when that worker retires and sells some of those investments so they can maintain their standard of living.â

After years of attacking 401(k) plan fees, some members of Congress now want to charge 10 basis points every time a hard-working American contributes out of their pay into their 401(k)...

âWeâre talking about the equivalent of an across-the-board fee increase on 401(k) plans,â Graff notes. In fact, based on a 2015 report by the Obama Administrationâs Council of Economic Advisors on the impact of 401(k) fees, this tax could reduce an Americanâs retirement savings by as much as 3% over their working life.

âIt appears that some in Congress may think that the only people who invest are super rich,â Graff concludes. âBut there are 80 million American workers who are investing for their future in their 401(k). At a time when there is so much concern about retirement income adequacy and the impact of 401(k) fees, itâs stunning that some members of Congress would attack the retirement savings of hard-working Americans.â

About the American Retirement Association