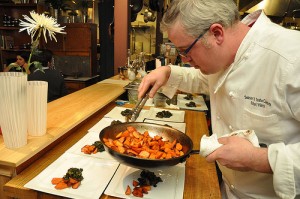 BOSTON–(BUSINESS WIRE)–Fidelity InvestmentsÂ®Â today announced results from its inaugural âTop Traders Survey,â which reveals the current strategy and future plans of the companyâs most successful trading customers. Top Traders are FidelityÂ®Â customers who made at least 36 trades over the past 12 months and whose total portfolio performance during this time was at least 20 percent, putting them among the 1,000 top-performing traders at the firm.

Against a backdrop of worldwide economic instability, sustained high U.S. unemployment and the rapidly widening federal budget deficit, 68 percent of Top Traders identify global economic instability as one of their top three investment concerns for 2013. To combat this, they plan to decrease their allocation to international equity by 10 percent in the six months following the survey.

Top Traders are seeking investment opportunities elsewhere, such as increasing their allocation to ETFs by 15 percent over the six months â the largest planned increase to any financial product. At the time of the survey, the respondentsâ portfolio allocation was 57 percent to equities, 16 percent to cash, 10 percent to bonds, seven percent to options and five percent to ETFs. Additionally, the three market sectors in which they would invest a hypothetical windfall of $100,000 are energy, information technology and utilities.

âWe view this survey as an excellent opportunity to look inside the minds of some of our best traders,â said Ram Subramaniam, executive vice president of Fidelityâs retail brokerage business. âThese investors are setting the standard for performance using our online brokerage platform and their insight can be immensely valuable to other traders looking to gain an investing edge.â

1) Shoot for the Stars, Settle for the Moon:

3) Focus on the Big Players:

4) You Are Your Own Best Teacher:

Thirty-two percent of Top Traders say other traders are too emotional in making investment decisions, follow whatâs trendy or sell too quickly

âOur Top Traders Survey offers insights to help other investors navigate the difficult fiscal path ahead of us in this country and elsewhere,â said Jennifer Samalis, senior vice president of Fidelityâs Active Trader Platforms. âThere is no knowledge that is not power and whether or not investors choose to utilize these tips, we felt it important to analyze and share this information based on what the best of the best are planning.â

To help customers achieve the best performance with their investments, Fidelity offers a range of no-cost advanced education classes online at FidelityâsÂ Learning CenterÂ and in-person at 179 investor centers around the country, as well as powerful tools such as streaming quotes and news, stock and mutual fund screeners, price alerts and independent, third-party research content. Investors interested in learning more about Fidelityâs trading advantages, including low-cost commissions, can visit FidelityâsÂ Trading OverviewÂ page.

About Fidelity Investments
Fidelity Investments is one of the worldâs largest providers of financial services, with assets under administration of $3.9 trillion, including managed assets of $1.7 trillion, as of December 31, 2012. Founded in 1946, the firm is a leading provider of investment management, retirement planning, portfolio guidance, brokerage, benefits outsourcing and many other financial products and services to more than 20 million individuals and institutions, as well as through 5,000 financial intermediary firms. For more information about Fidelity Investments, visitÂ www.fidelity.com.