Mixed consumer sentiment: The Fed knows how to grow the economy more than the president does 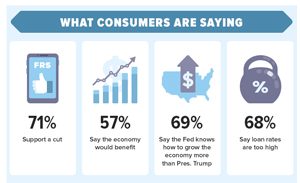 In response to the Federal Reserve cutting its target rate for the third time this year (and since the Great Recession) on October 30, the personal-finance website WalletHub today released the results of a new Fed Rate Survey gauging consumer sentiment on the matter.

High Interest Rates: 68% of Americans say the interest rates on their loans are too high.

Consumer Savings: Credit card users will save roughly $1.6 billion in interest if the Fed cuts its target rate again. The average household currently owes $8,602. However, new credit card applicants will not see lower rates as a result of a Fed rate cut.

Mixed Consumer Sentiment: 40% of people say they will feel more confident in the economy if the Fed cuts its target rate in October, and 69% say the Fed knows how to grow the economy more than President Trump.

Is it a good idea for the Federal Reserve to cut its target rate for the third time in as many months?
âNo, I donât think a third Fed rate cut in just three months is a wise move. Actually, the motive for cutting rates is starting to appear more and more political because the fundamentals of the economy are still strong. My worry is that weâre playing a card that could be worth a lot later on down the road at a time when it gets us very little. And thereâs no getting it back.â

Why are banks dragging their feet to lower rates for new credit card applicants?
âCredit card issuers have been slow to respond to Federal Reserve rate cuts because they donât think the cuts are here to stay. So theyâre just waiting until Fed policy changes. Plus, consumers arenât too sensitive when it comes to tiny changes in their regular APR.â

The best thing consumers can do is to use the lower interest rates to pay off their debt faster...

Can consumers do anything to take advantage of the Fed cutting its target rate?
âThe best thing consumers can do is to use the lower interest rates to pay off their debt faster. Then, when debt-free, people can put would-be debt payments toward building up savings.

Are you concerned about the risk of a recession?
âI do not see a recession coming in the next several months because the economy still appears to be doing quite well. In fact, a bigger risk right now is consumers panicking without reason, especially ahead of the biggest retail season of the year.