Exploring a Conflict Between Wealthy Investors' Beliefs and Actions

Head vs. Heart: Eight out of 10 embrace the economic recovery, but remain hesitant to invest;
Millennials more conflictedÂ then others 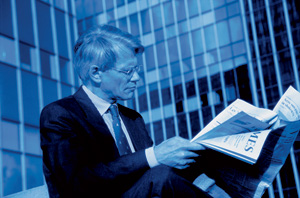 The findings reveal a struggle between investors’ rational perspective and the emotional impact of the financial crisis. On one hand, investors believe in the economic recoveryâ79% say it has met or exceeded their expectationsâand nearly half (47%) wish they had invested more during the rebound. On the other hand, many investors still carry emotional scars from 2008 that have kept them from fully participating in the recovery.

For example, the majority of investors (89%) have maintained or increased their cash holdings since the crisis, while only 18% are willing to assume more risk for greater returns. Recent volatility and global events have exacerbated investors’ feelings of uncertainty and made them even less likely to change their behavior. Forty-two percent say the volatility has rekindled memories of the financial crisis, and almost a quarter of investors believe it signals the start of a longer term market decline.

“Even before recent volatility tested their resolve, investors struggled to weigh the economic recovery and its positive effects on their finances against the lingering emotional fallout from 2008 and 2009,” said Paula Polito, Client Strategy Officer, UBS Wealth Management Americas. “The financial crisis appears to have cast a long shadow on investors.”

Wealthy investors disagree about how long the volatility that started in 2016 will last: most (77%) expect it to be temporary, while nearly a quarter (23%) think it signifies that the U.S. is on the verge of a longer-term market decline. Contributing heavily to this debate are diverse geopolitical events affecting markets, as well as the large volume of information causing broad confusion. Investor Watch revealed that 85% of wealthy investors believe the volatility is driven by so many factors it is too difficult to predict where markets are headed.

More than three quarters (76%) think the myriad global concerns affecting markets make it challenging to understand the whole financial picture. Eighty-one percent feel that global terrorism is part of the ânew normal.â Eight out of 10 (80%) are worried about the outcome of the 2016 U.S. Presidential election, and three quarters (76%) are concerned about the size of the countryâs debt load.

Wealthy investors have been holding significant cash reserves (20% on average) for the last several years, many doing so as a perceived safety precaution. And, while they continue to hold onto their funds, more than half believe having âtoo muchâ cash is unwise. They say they are ready to invest a quarter of their cash when they come across the right investment opportunity. Only 14% indicated they would advise the next generation to maintain a large cash allocation.

However, that does not mean all wealthy investors are putting their cash to workâquite the opposite. Nearly nine out of 10 (89%) have maintained or increased their cash holdings since the financial crisis, and approximately 40% believe investors can never hold âtoo muchâ cash. Seven years after the financial crisis and the bull market that followed, only 33% see market declines as opportunities to invest.

âMillennials are arguably more conflicted than other generations when it comes to how they view investing,â says Sameer Aurora, Head of Client Strategy for UBS Wealth Management Americas. “Almost half say they would take on more risk now, but theyâre holding twice as much cash as Baby Boomers. Also, Millennials are unhappiest with how their portfolios are positioned, but they are the least likely to do anything about it.â

Additionally, given their relative youth during the financial crisis, Millennials learned different lessons than Gen Xers, Baby Boomers and members of the Swing/WWII Generation. For instance, more than half of wealthy Swing/WWII investors (57%) took away that sticking with a âbuy and holdâ investing strategy is importantâbut only one in three Millennials (33%) feels the same way. By contrast, while 27% of Millennials say market timing is the most valuable lesson they learned, only 10% of Baby Boomers agree.

Investor Watch found that Millennials express a willingness to take on more risk since the financial crisis (43%)âdouble that of Gen X (21%), more than three times that of Baby Boomers (12%) and almost five times more than Swing/WWII (9%). Yet, when asked about cash holdings, Millennials, on average, hold the most cash: 41% vs. 28% for Gen Xers, 20% for Baby Boomers and 19% for Swing/WWII Generation.

Since the crisis, wealthy investors overall have tempered their return expectations, with only 17% aiming to outperform the market
68% of Millennials regret not investing more in the stock market as it was recovering vs. 52% of Gen Xers, 44% of Baby Boomers and 45% of Swing/WWII generation members
Millennials are the least happy with how their portfolios are positioned (15%) compared to Gen X (32%), Baby Boomers (50%) and Swing/WWII generations (56%).

UBS Wealth Management Americas surveys U.S. investors on a quarterly basis to keep a pulse on their needs, goals and concerns. After identifying several emerging trends in the survey data, UBS decided in 2012 to create the UBS Investor Watch to track, analyze and report the sentiments of affluent and high net worth investors.

For this 14th edition of UBS Investor Watch, 2,638 affluent and high net worth investors responded to our survey from December 16 â 28, 2015. The core sample of 1,835 investors have at least $1 million in investable assets, including 494 with at least $5 million. With 91 survey respondents, we conducted qualitative follow-up interviews. This UBS Investor Watch also includes an oversample for younger generations:

In light of the market volatility that began 2016, a follow-up survey was conducted from January 24 â 25, 2016, with an additional 500 investors with at least $1 million in investable assets.

Wealth Management Americas is one of the leading wealth managers in the Americas in terms of financial advisor productivity and invested assets. It provides advice-based solutions and banking services through financial advisors who deliver a fully integrated set of products and services specifically designed to address the needs of ultra-high net worth and high net worth individuals and families. It includes the domestic U.S. and Canadian business as well as the international business booked in the U.S.

UBS is committed to providing private, institutional and corporate clients worldwide, as well as retail clients in Switzerland, with superior financial advice and solutions while generating attractive and sustainable returns for shareholders. Its strategy centers on its Wealth Management and Wealth Management Americas businesses and its leading universal bank in Switzerland, complemented by its UBS Asset Management business and its Investment Bank. These businesses share three key characteristics: they benefit from a strong competitive position in their targeted markets, are capital-efficient, and offer a superior structural growth and profitability outlook. UBS’s strategy builds on the strengths of all of its businesses and focuses its efforts on areas in which it excels, while seeking to capitalize on the compelling growth prospects in the businesses and regions in which it operates. Capital strength is the foundation of its success.