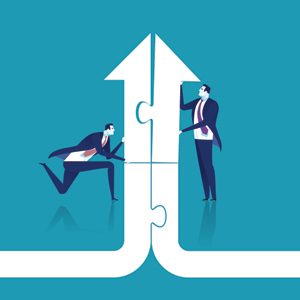 Markets experienced a push-and-pull last week between data indicating strong economic growth and lagging performance from several tech stocks’ earnings reports.[1] Domestic indexes had mixed results, as the S&P 500 gained 0.61%, the Dow was up 1.57%, and the NASDAQ dropped 1.06%.[2] International stocks in the MSCI EAFE had more of an uptick, gaining 1.32% for the week.[3]

On Friday, July 27, we received the initial reading of 2nd quarter Gross Domestic Product (GDP). The report indicated that the economy grew at a 4.1% annual rate between April and June. This reading was the fastest pace in almost 4 years – and significantly higher than 1st quarter growth.[4] Markets, however, had a relatively mild reaction to the GDP data due to rumors predicting even higher results.[5]

Let’s dig beyond the headline GDP growth number to see what else it tells us about our current economic circumstances.

The tax cut helped drive growth
The recent $1.5 trillion tax cut contributed to the latest GDP performance.[6] Both consumers and businesses spent more in the 2nd quarter.[7] Some economists believe this result will not last; without further tax cuts, consumers and companies won’t have additional funds at their disposal.[8]

Trade tension affected GDP
This year’s ongoing trade drama impacted the economy during the 2nd quarter, but perhaps not the way you might expect. Many soybean farmers tried to get ahead of coming tariffs by shipping their crops to China earlier than normal. This move helped GDP increase between April and June.[9]

Inflation slowed
When examining inflation, the Fed uses the personal consumption expenditures (PCE) without food and energy, also known as the core PCE. The 2nd quarter reading was 2%, down from 2.2%. Between healthy economic growth and solid inflation numbers, the Fed is likely still on track for two more rate hikes in 2018.[10]

Seeing strong growth this late in an economic expansion is good news. However, now we will have to see whether the growth can continue at this rate. When discussing the GDP readings, President Trump predicted even better results in future quarters. Some economists, on the other hand, believe trade wars and consumer spending could provide headwinds.[11]

The 2nd quarter [inflation] reading was 2%, down from 2.2%. Between healthy economic growth and solid inflation numbers, the Fed is likely still on track for two more rate hikes in 2018

We can’t predict the future, but we do know that economic fundamentals continue to be strong.[12] This week, we will receive a number of new readings – from manufacturing to employment to motor vehicle sales – and earnings season will roll on.

If you would like to discuss any of these details and how they may impact you, we’re ready to help.