Employees to Employers: We Want You to Share Our Values and Make the World a Better Place 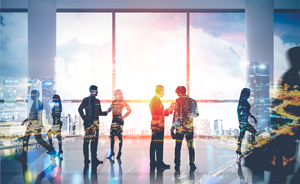 December 1, 2017 —Â NEW YORK–(BUSINESS WIRE)–As work and life continue to blend together, employees are bringing their personal values into the office and want companies not only to recognize those values, but share them and take action.

Fully nine out of 10 employees (89%) say they are willing to trade some of their salary to work at a company whose values match their own â a great deal of their salaries in some cases.

Part of sharing values is looking outside the four walls of the office â 61% of employees say that it is important to them to work for a company that contributes to the local community. On average, they say they are willing to take a 21% pay cut to work for a company with values aligned to theirs.

The importance of aligned values was strongest for Millennials, who say they are willing to take the largest pay cut â 34% on average â to work for a company that shares their values. While Millennials are typically viewed as the most idealistic generation in the workforce today, Gen X and Baby Boomers werenât too far behind: Gen Xers say they are willing to take an 18% pay cut and Baby Boomers, 15%, to share values with the company where they work. This willingness to trade off salary for aligned values is not reserved for higher income levels but is consistent across all income brackets: on average, those making less than $50K, between $50-100K, and $100K+ would take a 22%, 21%, and 19% cut, respectively.

Companies can reap rewards when they share values and act on these values, as employees who felt their values aligned with those of their employers were more than twice as likely to be satisfied in their jobs (78%) and feel loyal to their companies (77%) than those whose values didnât match (32% and 31%, respectively). When values match, more than three-quarters (78%) plan to stay at their company, compared to 57% when values are misaligned.

âPeople across all generations in the workplace today want companies to play a stronger role in aligning personal purpose with company actions,â said Jon Richter, vice president of corporate citizenship for MetLife. âCompanies that want to succeed in todayâs marketplace must rise to meet this challenge.â

As part of their expectations on sharing values, employees want companies to take action on those values, as respondents were three times more likely to agree that âcompanies should contribute to the well-being of communities and societyâ than âcompanies should focus solely on making moneyâ (57% vs. 18%). Responding to these values took the form of a responsibility of companies to act, including to improve local communities (75% agree), work broadly to solve problems that impact employees (63% agree), and be more involved in improving the environment (60% agree).

Are companies fulfilling their employeesâ desire for values alignment and action? More so than you might think. Respondents were four times more likely to agree their own company âmakes the world a better placeâ than they were to disagree (56% vs. 13%). Another finding sheds light on this optimistic view of their employer held by many American workers: Despite a common perception that trust in companies is eroding, 57% still say they trust their company to âdo the right thingâ always or most of the time, versus only 37% who trust companies in general and 26% who feel that way about the government.

Through its Employee Benefit Trends Study (EBTS), now in its 15th year, MetLife tracks both worker and employer attitudes and expectations about the role of employee benefits for the workforce. The next EBTS will be released in April 2018. The Role of the Company Survey looks at the workplace through a different lens, revealing what employees and society at large expect of corporations broadly.

MetLifeâs survey on The Role of the Company was conducted in July 2017 and was fielded by ORC International, a leading business intelligence firm. The survey comprised 1,006 interviews with part-time and full-time U.S. employees, ages 21 and over. The margin of error was plus or minus 3.5%.