"The Dumbest Way to Die Is Without Life Insurance" 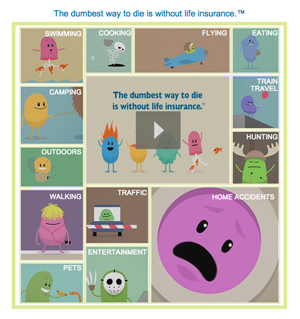 The campaign uses characters and creative from the award-winning Dumb Ways to Dieâ ¢ video to promote the importance of life insurance to Canadians through a multi-media campaign including social media, digital advertising, direct mail and television. Empire Life has partnered with Evolution to license the public safety campaign video and use of the characters in Canada. The Empire Life national, multi-media advertising campaign launches today including three 30-second videos in English and French along with a new insurance website: empirelife.ca

According to a 2013 LIMRA research study, 65 per cent of Canadians have no life insurance or feel they are underinsured. “Too many Canadians would be severely challenged to maintain their family’s lifestyle if a breadwinner died prematurely. Hectic lives and high consumer debt are hindering today’s consumers from making life insurance a priority on their to-do-lists,” says Sean Kilburn, Senior Vice-President Insurance at Empire Life.

With this in mind, the ad campaign is designed to engage and educate Canadians about the need for life insurance using an entertaining approach. The message “The dumbest way to die is without life insurance,” aims to make the topics of death and life insurance more approachable and remind consumers that the unexpected happens every day.

“We are excited to partner with Empire Life to bring awareness about the importance of having life insurance to Canadians with the Dumb Ways to Die characters.” says Travis J. Rutherford, President of Evolution – the brand’s global licensing agency. The Dumb Ways to Die train safety campaign became a viral sensation with over 95 million views on YouTube to date, a top 50 online app and a robust licensed merchandise program that is in full development for multiple territories worldwide.