How risk-pool composition and enrollment trends are impacting overall performance

New research from the American Academy of Actuaries

The 2016 health insurance premium rate filing process is underway, with insurers having submitted their premiums to state and federal regulators for review.

This [article] outlines factors underlying premium rate-setting generally and then highlights the major drivers behind why 2016 premiums could differ from those in 2015.

It focuses primarily on the individual market, but some factors that will particularly affect the small group market are highlighted as well.

Actuaries develop premiums based on projected medical claims and administrative costs for a pool of individuals or groups with insurance.

Who is covered: The composition of the risk pool
Pooling risks allows the costs of the less healthy to be subsidized by the healthy. In general, the larger the risk pool, the more predictable and stable premiums can be.

Projected medical costs
The majority of premium dollars goes to medical claims, which reflect unit costs (e.g., the price for a given health care service), utilization, the mix and intensity of services, and plan design. Unit costs can vary from one health plan to another depending on the ability and leverage of the issuer to negotiate fees with health care providers.

Other premium components
Premiums must cover administrative costs, including those related to insurance product development, sales and enrollment, claims processing, customer service, and regulatory compliance. They also must cover taxes, assessments, and fees, as well as profit (or, for not-for-profit insurers, a contribution to surplus).

Laws and regulations
Laws and regulations, including the presence of risk- sharing programs, can affect the composition of risk pools, projected medical spending, and the amount of taxes, assessments, and fees that need to be included in premiums.

There is, however, some uncertainty regarding the causes of these trends and whether they will continue. The economic downturn and slow recovery likely have contributed to this slowdown.

More structural changes to the health care payment and delivery system also might have contributed to slower medical spending growth, through for instance, a greater focus on cost effective care. Nevertheless, medical spending will continue to grow and costs for prescription drugs, in particular, are expected to increase as more high-cost specialty drugs come to market (e.g., new drugs to treat Hepatitis C, high cholesterol, and cancer).

Reduction of reinsurance program funds
The ACA transitional reinsurance program provides payments to plans in the individual health insurance market when they have enrollees with especially high claims, thereby offsetting a portion of the costs of higher-cost enrollees. This reduces the claim costs that insurers expect to pay, allowing them to offer premiums lower than they otherwise would be.

The following chart shows the program’s funding and design features over its three-year lifetime (the program sunsets after 2016): 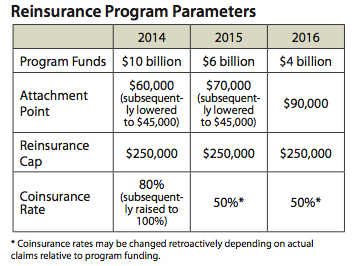 As the reinsurance funds decrease, there is corresponding upward pressure on premium rates, which will continue into 2016.

For 2016, the reinsurance program will reimburse insurers for 50 percent of an individual’s health claims between $90,000 and $250,000, which would likely reduce net claims by about 4 to 6 percent. This compares to the rate reduction in 2014 of 10 to 14 percentand in 2015 of 6 to 11 percent. Insurers will be comparing the impact of these reinsurance parameters to those in their 2015 rates, which may have been based on the initially announced $70,000 attachment point or the reduced $45,000 attachment point.1

How 2016 premiums change from 2015 will depend on how assumptions regarding the composition of the 2016 risk pool differ from those assumed for 2015. When calculating 2015 premiums, insurers made assumptions regarding the characteristics of individuals obtaining coverage—based on demographics, health status, prior health insurance status, etc.—and what their medical spending would be.

There was much uncertainty regarding these assumptions because insurers had only limited experience data on individuals who were newly insured in the post-ACA reform market in 2014. With another year of experience, insurers have gained more information regarding the risk profiles of their enrollee populations and how these compare to the profiles for the market as a whole, and will adjust their premiums accordingly, either up or down. When developing their 2016 premiums, insurers had information regarding the demographic characteristics, claims, and risks of their 2014 enrollees, and limited information on their 2015 enrollees.

There is still uncertainty regarding risk pool profiles for 2016, however, due to several factors. First, many 2014 enrollees were enrolled for less than a full year, due to administrative challenges associated with the initial insurance exchange websites and the extended open enrollment period. When using 2014 experience to project 2016 enrollee risk profiles and spending, insurers might have needed to make adjustments to 2014 experience data to the extent that full- year enrollees had different demographics and claims experience than those who enrolled later.

In addition, 2014 claims data may have needed to be adjusted to the extent pent-up demand caused a temporary increase in spending among the newly insured that wouldn’t be expected to continue at that level in the future. There is considerable uncertainty regarding the size of such adjustments.

Second, for insurers that did not gain significant enrollment in 2014, their 2014 experience might not be indicative of future experience because smaller risk pools may be more subject to random fluctuations. In addition, the risk profile for these insurers could change over time if they have a significant increase in enrollment; new enrollees could have different characteristics than those enrolled in 2014.

More structural changes to the health care payment and delivery system also might have contributed to slower medical spending growth, through for instance, a greater focus on cost effective care. Nevertheless, medical spending will continue to grow and costs for prescription drugs, in particular, are expected to increase as more high-cost specialty drugs come to market

This potential for turnover contributes additional uncertainty as to the risk profile an insurer will have in 2016. Fourth, at the time insurers submitted their 2016 rate filings, they had only limited information regarding the risk profile of the market as a whole and did not know the full impact of the risk-mitigation mechanisms— risk adjustment, reinsurance (individual market only), and risk corridors.

The market-level outcome of the 2014 risk adjustment program was not known until June 30, 2015, after insurers had already submitted their 2016 rate filings. Until that point, insurers had limited ability to assess their risk position relative to the rest of the market. Depending on the state(s) in which they filed, insurers may be able to revise their 2016 rate filings to incorporate new information on risk-adjustment program outcomes. Nationally, total 2015 individual market enrollment increased from 2014, but perhaps not as significantly as some insurers might have expected when establishing 2015 premiums.

Average health costs for a given population in a guaranteed-issue environment can generally be viewed as inversely proportional to enrollment. A larger individual market enrollment as a share of the eligible population will tend to be associated with lower average costs, and lower enrollment will usually be associated with higher average costs. This is because those potential members with greater health care needs are more likely to enroll than those with lesser needs.

Higher take-up rates typically reflect larger enrollment among healthy individuals. To the extent that insurers priced 2015 premiums with the expectation of significant enrollment growth in the market as a whole that has not yet materialized, 2016 premiums might need to increase to reflect the increased average costs of those anticipated to enroll. If insurers expect significantly increased enrollment in the market as a whole in 2016 over 2015 levels, premium increases will be moderated. Other factors also will affect the composition of the 2016 risk pool and its impact on premiums, including:

Importantly, if an insurer’s actual experience regarding the risk profile of its 2014 and 2015 enrollees differs from assumptions and losses occurred in 2014 and 2015, it cannot recoup past losses through higher premiums for 2016. However, assumptions and expectations for 2016 would be determined incorporating 2014 experience and possibly the experience of the first couple of months in 2015.

This change increases the number of employers that will meet the definition of a small group and could impact premiums for those employers as well as those already defined as being small groups.2 Under the expanded small group definition, groups sized 51-100 will face more restrictive rating rules, which will increase relative premiums for some groups and reduce them for others.

In addition, groups sized 51-100 will face additional benefit and cost-sharing requirements, which could reduce benefit flexibility and increase premiums. The more restrictive rating and benefit requirements could cause more groups sized 51-100, especially those with healthier, lower-cost employees, to self-insure, particularly among those for whom premiums would increase under the new rule.

This could put upward pressure generally on small group market premiums. The impact of the small group definition expansion will likely vary by state and over time. Under the transitional policy, employers with 51-100 employees may renew their existing large group coverage on or before October 1, 2016 for a 12-month period.

Since these employers are expected to purchase the option that provides the lower cost coverage, the least healthy groups likely will find lower premiums in the small group market which could put upward pressure on 2016 small group rates in those states that allow the transitional policy.

This upward pressure could be mitigated in later years, when all groups up to 100 are part of the small group market. However, upward pressure on small group rates could continue if healthy groups turn to self- insurance rather than purchasing fully insured coverage. In states that do not allow the transitional policy, the impact on 2016 rates depends on the relative costs of the groups sized 51-100 compared to groups sized 1-50 as well as insurer expectations regarding the likelihood of groups sized 51-100 deciding to self-insure.

Changes in provider reimbursement structures
Any increased negotiating power among providers could put upward pressure on premium increases. On the other hand, insurers could pursue changes in provider reimbursement structures that move from paying providers based on volume to paying based on value. For example, accountable care organization (ACO) structures offer incentives to provide cost effective and high quality care. Such efforts could put downward pressure on premium increases at least in the short term.