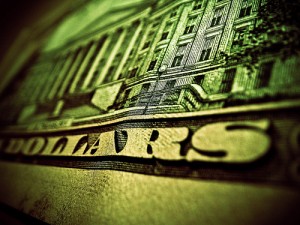 The cleanest of the dirty shirts doesnât necessarily preserve your purchasing power. Sure, the U.S. dollar has beaten the Russian Ruble and some others of late, but when it comes to real competition, the U.S. dollar has taken a back seat. The U.S. dollarâs long-term decline may be firmly in place and investors may want to buckle up to get ready for the ride.


Two years ago, in the midst of the Eurozone debt crisis, the euro beat the greenback and last year the euro was the best performing major currency. Over the years, we have written extensively about what may be the most misunderstood currency. However before we discuss why the euro may be doomed to soar higher, we should zoom in on the fact that the Federal Reserve might have the best printing press of them all

Even former Fed Chair, Ben Bernanke, referred to central bank balance sheet growth as printing money, although no physical currency may actually be printed. Instead, the Fed has been buying Treasuries and Mortgage-Backed Securities (MBS) through strokes of a keyboard, crediting the accounts of the banks that the securities were purchased from. While the Bank of Japan is trying to play catch-up as of late, the Fed remains the clear leader. Bank of England has also been busy âtaperingâ â plateauing out at a high level. Part of the reason why pundits try to talk up the greenback is because of what they perceive to be higher rates in the future.

There are a couple of things wrong with that view:

In practice the ECB has mostly limited itself to talking down the euro. Any attempt to talk down the euro has only lasted from a few hours to a few days. The ECB has also cut rates, causing the currency to weaken for a few weeks. ECB President Draghi has also encouraged the creation of an asset backed securities market, i.e. securitizing an amazing amount of Eurozone assets, in order to boost economic growth.

The main problem with this idea is that it takes years to develop such a market (and has its own sets of risks). Then thereâs the talk of the ECB engaging in broad based asset purchase programs akin to what the Fed has been doing. While technical issues of such a program might be overcome, what exactly would this program achieve? Lowering yields? Well, thatâs happening where itâs needed, in the Eurozone periphery and Germany doesnât need the additional jolt.

Just because it wouldnât make much sense doesnât mean it wonât happen. In fact, we write this ahead of the latest ECB rate decision, so by the time this is published, one of these initiatives may have been announced. Maybe the euro will weaken if such a program is announced, but because of the limited effectiveness, such weakness may yet again prove temporary.

The Eurozone has another major advantage over the U.S. and although more difficult to quantify, the massive Fed purchase programs cause U.S. asset prices to become distorted. It may not be possible for capital to be allocated efficiently, and thus create the risk of asset bubbles. While U.S. policies cause ripple effects throughout the world (there are plenty of other central banks pursuing similar policies, most notably, the Bank of Japan), the Eurozone is showing important signs of healing.

Itâs important to note that when a crisis flares up in the Eurozone, we longer see the so-called risk of contagion like we did during the peak of the crisis in Cyprus, Spain. Where they held a Treasury auction paying the lowest yields since the early 1990s. Of late, hedge funds are buying Greek banks, as well as Spanish real estate. We are not suggesting these are good buying opportunities, but it is a very healthy development that so-called ârisk friendlyâ capital is exposed to what are clearly risky assets. Should these investments fail, it is a hedge fund losing money, rather than a major European bank. A key driver behind many of the reforms that have been undertaken is from the pressure of the bond market. Donât get us wrong there are plenty of challenges left in the Eurozone, especially as bond market pressure has abated. But in our assessment, it is wrong to conclude that the euro must be weak as a result.

Coming back to the U.S., one of the greenbackâs greatest vulnerabilities may well be its current account deficit. In plain English, the current account deficit is the amount needed to come into the U.S. in order to keep the dollar from falling (hence the view that the deficit suggests foreigners want to invest in the U.S.). Even with recent improvements in the current account deficit, the U.S. still needs to attract over $1 billion U.S dollars every day to keep the currency from falling. Having said that, the current account balance is not a good predictor of exchange rates. In our analysis, it is an important indicator of the potential vulnerability of a currency. Think about what may get U.S. policy makers to make the tough decisions to get our deficits sustainable? We think it is the pressure of the bond market. However, for the Eurozone as a whole, budget deficits were financed internally, even during the peak of the crisis. In contrast, the greenback relies on inflows from abroad and as such, if bond market acts up the U.S. dollar might come under more pressure than the euro has ever seen and would force policy makers to impose reforms.

Donât miss another Merk Insight where we discuss how the U.S. dollar, gold and currencies impact investorsâ portfolios. Subscribe to our newsletter.