A Dichotomy of Financial Feelings 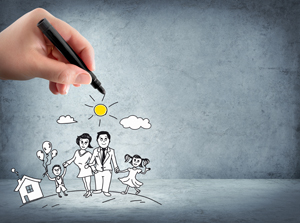 Mr. Mucci is president of the Group Protection business at Lincoln Financial Group. He is responsible for the growth and profitability of the business, and directs the divisionâs product development, underwriting, distribution, service, strategy and marketing efforts to ensure Lincoln Financial remains at the forefront of group benefits market trends, product evolution and client responsiveness. Connect with him by e-mail: [email protected]

Finances can inspire a variety of emotionsâ¦from excitement and happiness to fear and even dread.

My company recently conducted a comprehensive study that examines Americansâ sentiments with regard to personal finance â their goals and expectations, the roadblocks and obstacles theyâre facing in achieving those goals, the financial sacrifices they make and more.

And while itâs clear that those surveyed have a great deal of passion, persistence and hope when it comes to their financial situations, there is an underlying feeling of uncertainty.

Almost a quarter of respondents â 24 percent â say they are âbarely getting byâ or worse financially. Thirty-six percent describe their financial situation as âstableâ and 32 percent say they are âcomfortable.â A mere seven percent claim to be âvery well off.â

But overwhelmingly, those with specific financial goals feel more optimistic about their future. In fact â those with goals are four times more likely than those without goals to say theyâll be in a better place, financially, over the next four years.

In the study â titled âFinancial Focus: Goals and Reflections of Todayâs Consumerâ â we asked respondents about some common financial goals, and found some drastically different reactions.

When asked what excites them about their financial futures, almost half of Americans (46 percent) say they are most excitedÂ about retirement. A high number indeed â itâs actually tied with travel for the top spot! The problem is: 35 percent of people say theyâre intimidated by saving for retirement. This concern is notably high for Gen-Xers (defined as those ages 40 to 51)â¦ 47 percent of that cohort are worried about saving enough.

Similarly, providing for oneâs family evokes the same contradictory reaction: 41 percent of people are excited about it, but 27 percent say it scares them. Young Millennials, in particular, are the most afraid generation of being able to provide for their families in the future. In this study, Young Millennials are defined as individuals ages 18 to 29.And some financial issues purely incite fear. The top financial concern on Americansâ minds today?(see below)

Almost half of consumers â 46 percent â fear they will need to cover major medical expenses for which they did not plan. In a similar vein, 28 percent are worried about unexpected accident expenses.

Debt is another fear-inducing financial issue. Twenty-eight percent of Americans say they fear not being able to pay off debt.

All of these major financial situations are critically connected â without the right protections in place, an accident or illness can derail retirement savings, disturb oneâs ability to provide for their family, or, propel someone into debt.
Today, only about half of Americans say they have an emergency savings account that could potentially cover an unexpected incident. So, ensuring the right financial protections are in place is absolutely critical.

Insurance coverages, such as disability, accident or critical illness insurance, can help provide people with peace of mind when it comes to unforeseen health issues or accidents:

Having these coverages in place can enable individuals to save confidently, without the worry of compromising their savings (or worse!) if something unexpected comes their way.

Employers and financial intermediaries can have a strong influence in communicating the importance of certain insurance coverages and savings vehicles to consumers â many of whom may be unaware that their employers offer these products, or simply might not know how they work.

Just 23 percent of consumers surveyed have disability insurance. Even fewer have accident insurance (19 percent) and less have critical illness coverage (15 percent). These are valuable coverages that can boost financial security and really round out a financial plan â and they may be underutilized today simply due to lack of understanding.

Financial Sacrifices: Fun and Future are First to Go

Financial Sacrifices: Fun and Future are First to Go

Vacations are most often given up. According to the study, more than half of Americans â 52 percent â have put off vacations in the past five years to save money.Â Savings frequently get sacrificed as well â in the past five years, nearly 40 percent of consumers have postponed saving.

Some of the âscariestâ sacrifices are the ones that center on our health. Nearly a third of Americans have sacrificed doctor visits in the past five years, and 21 percent even postponed a needed medical procedure due to cost. Oral health is impacted as well â 34 percent of people say they have sacrificed visiting the dentist and 33 percent have delayed a dental procedure in the past five years.

Health isnât something that should ever be sacrificed, but health insurance doesnât always cover everything. Thatâs why supplemental insurance coverages are so important â many of which are available at our fingertips through work, such as disability, accident, critical illness, dental and vision coverage.

Other items that are frequently sacrificed to save money include maintenance or repairs on homes (35 percent) or cars (31 percent).

A Roadmap for Success

Specific financial goals can help individuals plan for a better future and alleviate some of their financial fears, but many people arenât sure where to start.

Of those with short-term financial goals, âpaying off/down debtâ comes through as the number one priority. This isnât surprising, as 50 percent of people say debt is a problem for them in some way. Fourteen percent actually characterize it as a âmajor issueâ in their lives. Many also cite paying down debt as a long-term focus â in fact, 17 percent of people say their lifetime financial goal is to be debt-free.

Saving, in general, is also a big priority for those with short-term goals â 26 percent cite it as an objective this year. About half of those surveyed would use any extra money each month for savings (48 percent), and 22 percent plan to put extra money toward their retirement savings specifically. But âsavingâ is a broad idea, and consumers may need help from financial professionals in determining exactly what that means for them.

When thinking about lifetime financial goals, retirement rises to the top. A third of Americans say this is their top lifetime goal â more than any other outcome.

Again, employers and financial intermediaries are a key source of information for savers. They can help people understand the importance of enrolling in an employer-sponsored plan, if available, and saving at least up to the employer match to not leave any free money on the table. Nearly 80 percent1 of Americans will rely on their employer-sponsored plan as their primary vehicle for retirement savings, so their achievement of their financial goal for tomorrow is dependent on how much they save today.

Although we have some major financial concerns and fears, weâre generally an optimistic group when looking to the future. Eighty-five percent of Americans say they expect their financial situation to be better in the next four years than it is today. They just need a little help to get there.

Financial wellness is about the big picture, and having all of the right pieces in place to balance budgeting today, saving for the future, and protecting that savings.

Employers and financial intermediaries can certainly play a role in helping consumers understand what those pieces are, where theyâre available, and how to best leverage them. â

Endnotes
1. Willis Towers Watson, Global Benefits Survey, 2015/2016
All data is from Lincolnâs Financial Focus Study, unless otherwise noted. Results of the 2017 Financial Focus Study are based on an online survey of 2,500 adults 18 years of age or older across the United States, conducted in 2017 by Lincoln Financial Group and PSB. The sample was targeted using quotas to reflect the proportion of adults 18 or older within the United States. The margin of error is +/- 2% at the 95% confidence level.
Lincoln Financial Group is the marketing name for Lincoln National Corporation and insurance company affiliates, including The Lincoln National Life Insurance Company, Fort Wayne, IN, and in New York, Lincoln Life & Annuity Company of New York, Syracuse, NY. Variable products distributed by broker-dealer/affiliate Lincoln Financial Distributors, Inc., Radnor, PA. Securities and investment advisory services offered through other affiliates