Despite Political Polarization, The Nation Is United In Concern About Its Retirement Crisis

Millennials are most pessimistic but most willing to save more. Read the National Institute On Retirement Security’s groundbreaking report Retirement Insecurity 2019 | Americans’ Views of the Retirement Crisis here. 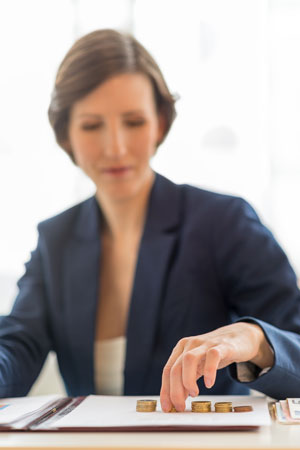 WASHINGTON, D.C., February 26, 2019 – Despite deep political polarization, Americans are united in their concern about retirement. In overwhelming numbers, Americans say the nation faces a retirement crisis, with Democrats at 80 percent, Republicans at 75 percent, and Independents at 75 percent.Â New research also finds that Americans see government playing an important role in helping workers prepare for retirement, but lawmakers in Washington aren’t delivering results – and the new tax law has not helped. Only 34 percent say the tax overhaul passed last year is helping on the retirement front, 84 percent say leaders in Washington have no idea how hard it is to prepare for retirement, and 80 percent say government should ease the way for employers to offer pensions.

These findings are contained in a new research, Retirement Insecurity 2019 | Americans’ Views of the Retirement Crisis, available here. The findings are published by the National Institute on Retirement (NIRS) and based on research conducted by Greenwald & Associates. The findings will be reviewed today at the NIRS annual retirement policy conference in Washington, D.C. Watch a live webcast of the conference here.

The research also indicates that about two-thirds of Americans believe that pensions are better than 401(k) accounts in terms of ensuring retirement security. Also, Millennials are the most worried about a financially secure retirement (72 percent),and is the generation most willing to put away more money now for retirement (60 percent).

A nation divided… but not on issues of retirement security

“Americans are divided on so many issues, but not when to comes to their economic insecurity in retirement. Democrats, Republicans and Independents alike are concerned that they won’t be able to achieve financial security in retirement and that managing investments in retirement is problematic,” said Diane Oakley, NIRS executive director.

“While Americans are disappointed with national political leadership on retirement policies, they are highly supportive of state efforts to bolster retirement readiness. We find that 74 percent of Americans would participate in these new state-sponsored retirement plans, and that portability and monthly income are features that drive their support,” Oakley said.

“If the new Congress is serious about addressing Americans’ retirement anxiety, a bold first step would be strengthen Social Security and make it easier for companies to offer pensions. A majority of Americans agree that government needs to increase Social Security contributions from both employers and workers, and 76 percent say that the disappearance of pensions is killing the American dream,” Oakley explained. 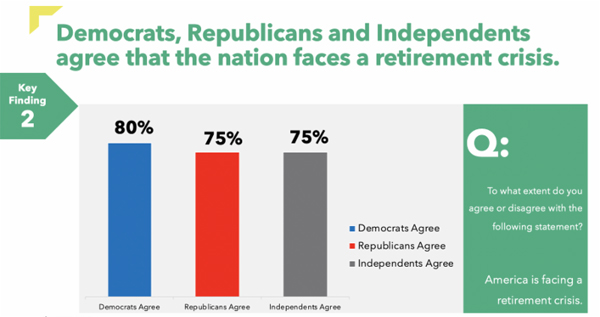 The key research findings are as follows:

In overwhelming numbers, Americans are worried about their ability to attain and sustain financial security in their older years. Three-fourths of Americans say the nation faces a retirement crisis. Some 70 percent say the average worker cannot save enough on their own to guarantee a secure retirement. And 65 percent say it’s likely they will have to work past retirement age to have enough money to retire.

Americans see government playing an important role in helping workers prepare for retirement, but lawmakers in Washington, D.C. just don’t get it. And the new tax law has not helped. Some 84 percent say leaders in Washington have no idea how hard it is for American workers to prepare for retirement. More than half agree that government needs to increase Social Security contributions from both employers and workers. Few Americans (34 percent) see the new tax law as improving their retirement prospects.

Americans are highly positive on the role of pensions in providing retirement security and see these retirement plans as better than 401(k) plans. More than three-fourths of Americans have a favorable view of defined benefit pensions. Some 64 percent say pensions are better than 401(k) accounts in terms of ensuring retirement security. And, 77 percent say those with pensions likely to feel more comfortable retiring than those relying on individual savings. 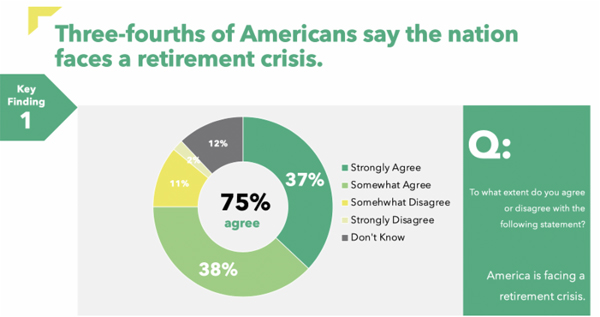 Information for this study was collected from online interviews between January 7-16, 2019. A total of 1,250 individuals aged 25 and older completed the survey. The final data were weighted by age, gender, income, and race to reflect the demographics of Americans 25 and older. The sample was selected using the Research Now online panel. Research Now maintains one of the industry’s most comprehensive and deeply-profiled online survey panels. Panel members are recruited through a controlled mix of both online and offline methods, using “By-Invitation-Only” acquisition, making this panel more representative of the population.