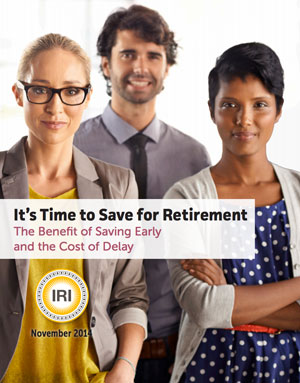 âThereâs no lost and found for retirement savings. When saving for retirement is delayed, the benefits of compounding interest are gone and can never be reclaimed,â IRI President and CEO Cathy Weatherford said. âDelaying retirement will only partially recover lost savings and may not even be feasible for some workers. And those who believe they can simply save a higher percentage later on will be in for sticker shock when they realize how much of their income will need to be dedicated to retirement savings to make up for lost time. Few workers can afford to contribute 25 percent, 35 percent, or even more of their annual income to their retirement plans.â

Other key findings from the report

The powers of starting to save at young ages

One of the most powerful retirement planning decisions a younger worker can make is to contribute as much as possible, at as young an age as possible, to a retirement plan such as a 401(k). Contributing over a longer period of time increases the total amount contributed and maximizes the compounding of investment earnings and interest. The two charts below illustrate how potential retirement income is impacted by delaying contributions to a 401(k) or other deferred contribution retirement plan.

The charts are based on the following assumptions:

The entire report, âItâs Time to Save for Retirement,â is available HERE.