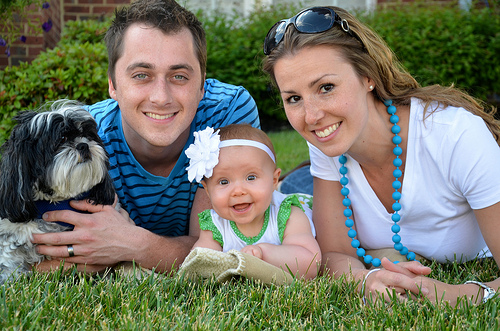 The Insure.com 2015 Father’s Day Index calculates the value of Dad’s household contributions – those outside of his actual income – to be $25,709 this year, up 6.7 percent from last year.

That figure puts Dad’s worth up nearly 26 percent over his 2011 value of $20,415, the first year of the index. To determine Dad’s value around the house, Insure.com analyzes Bureau of Labor Statistics wage data for occupations that mirror the tasks fathers often do around the home. (See the full task chart and associated wages.)

Wages for tasks such as taking care of the lawn (grounds maintenance worker), driving the kids around (taxi driver) and being a scout leader (recreation worker) all had decent increases in the past year. Of the home chores commonly designated to Dad, only the pay he would receive for doing the family finances (accountant) declined.

However, that doesn’t mean that Dad’s household tasks are worth anywhere near what Mom’s are. “Dad’s value may be on the rise, but so is Mom’s and her hefty amount of household tasks makes her worth 153 percent more than Dad, at $65,284,” says Penny Gusner, consumer analyst for Insure.com. That wage figure is from the Insure.com Mother’s Day Index, which came out last month.

A survey commissioned by Insure.com asked 1,000 men and women how much a father should get if he were paid for his contributions around the house. The majority, 58 percent, said that Dad should receive less than $50,000. More women than men said this was true, with 61 percent of the women saying $50,000 or less was fair wages for Dad’s household tasks, while only a little more than half of the men, 55 percent, said the same.

Here is the breakdown of how much respondents said Dad was worth for his household tasks:

Dadâs value may be on the rise, but so is Momâs and her hefty amount of household tasks makes her worth 153 percent more than Dad, at $65,284

While 38 percent of women surveyed said Moms should get paid $75,000 or more for her tasks at home, only 19 percent said Dad was worth that much. Dad’s traditional household duties may pay less than moms’, bringing his projected value lower, but fathers’ contributions to their households are just as important, says Gusner.

“If Dad were to be suddenly missing from the household there would be a replacement cost for all that he does at home, as well as a gaping hole in the finances where his income used to be,” says Gusner. Gusner says these gaps should be front-of-mind for consumers when they shop for life insurance coverage.

“The index may be a playful approach to peek at the value of what Dad does around the house, but it should also make you realize that owning a life insurance policy — especially when you’re the bread winner of the family — is beyond important if you want peace of mind that expenses will be covered when you’re gone,” she adds.

Methodology “Dad’s value” is based on occupational wages from the Bureau of Labor Statistics and does not include a salary from work outside the home. It is calculated using a list of common household tasks that fathers often perform. For the data on what people think fathers should earn if they had a household salary, Insure.com commissioned a survey of 1,000 married men and woman age 25 or older. The survey was fielded by Op4G in February 2015.

About Insure.com
Insure.com provides a comprehensive array of information on auto insurance, home insurance, health insurance, and life insurance. The site offers an extensive library of originally authored insurance articles and decision-making tools that are not available from any other single source, including its extensive car insurance discounts tool. Insure.com is owned and operated by QuinStreet, Inc. (NASDAQ: QNST), one of the largest Internet marketing and media companies in the world. QuinStreet is committed to providing consumers and businesses with the information they need to research, find and select the products, services and brands that best meet their needs. The company is a leader in visitor-friendly marketing practices. For more information, please visit QuinStreet.com.