If not for unusual Q2 consumer spending, GDP growth would be dismal 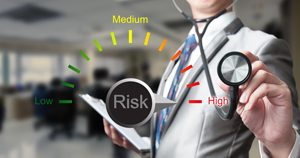 August 13, 2019 — ANN ARBOR, Mich.–(BUSINESS WIRE)–Overall U.S. customer satisfaction retreats for a third consecutive quarter, falling 0.1% to a score of 76.4 (on a scale of 0 to 100) on the American Customer Satisfaction Index (ACSIÂ®). This points to continued economic uncertainty and suggests a higher risk that weâll see a downward shift in consumer demand due to falling consumer utility (satisfaction) with goods and services.

With few exceptions, the rate of growth in consumer spending â which accounts for almost 70% of GDP â has declined since 2016. ACSI is still below its high watermark from 2017, yet GDP growth has, by and large, increased over the same time periods.

While strong consumer spending can make up for an otherwise weak economy, it canât do this for long. The second quarter results for consumer spending look more like an aberration, most likely due to pent-up demand, an improvement in household income, and continued low unemployment.

It's untenable for customer satisfaction to weaken and for consumer spending to strengthen in the long run. But thatâs what happened...

With falling customer satisfaction and a shaky business investment outlook, the economy looks increasingly uncertain and difficult to predict. In fact, each quarter has had its ups and downs with respect to the components of GDP. These components usually operate much more in concert. When they donât, prediction is more difficult, and thereâs a greater risk of a serious downturn.

With continued weakness in ACSI, thereâs little hope that the consumer will be able to come to the rescue once again. Unless discretionary household income growth overcomes the impact of tariffs on prices, and wages continue to rise, there is little to suggest robust economic growth for the foreseeable future.

The national ACSI score reflects customer satisfaction across sectors and industries over a rolling 12-month period. For more, follow the ACSI on LinkedIn and Twitter at @theACSI or visit www.theacsi.org. 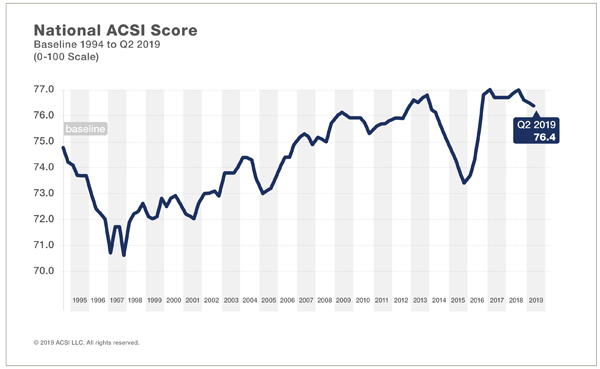 The American Customer Satisfaction Index (ACSIÂ®) has been a national economic indicator for 25 years. It measures and analyzes customer satisfaction with more than 400 companies in 46 industries and 10 economic sectors, including various services of federal and local government agencies. Reported on a scale of 0 to 100, ACSI scores are based on data from interviews with roughly 300,000 customers annually. For more information, visit www.theacsi.org.