The Evolution of Money

Crypto-Currency Market Continues to be an Attractive Sector 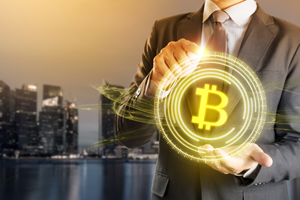 Expectation for another upcoming split of bitcoin drove the investors’ interest towards the digital currency. According to industry website CoinDesk Bitcoin was trading at $5,842 during Monday’s trading session. Investors are closely watching hard fork in November, which may lead to the creation of a new cryptocurrency called bitcoin gold.

On August 1st , Bitcoin split into bitcoin and bitcoin cash. After the split, bitcoin has gained over 100 percent, while bitcoin cash hit a high of over $800 in mid-August. But the price of bitcoin cash pulled back from record high and is trading at $316.43 on Monday, according to data from Coinmarketcap.com. Other cryptocurrencies have also been traded higher this year. Ethereum, the second largest cryptocurrency by market capitalization, is up as much as about 3400 percent this year. Ripple is also gaining some market shares, with a market cap of about 7.4 billion.

Opportunities in the ‘payment space’

Glance Technologies Inc. (OTCQB: GLNNF) also listed on the Canadian Stock Exchange under the Ticker ‘GET’. Announced breaking news this morning that, “it is researching the creation of a rewards based cryptocurrency for use within its mobile payment platform.”

A cryptocurrency may be redeemable through the Glance Pay app and its affiliates and eventually potentially outside of the Glance Pay platform. Rewards may accrue through usage of the app or via other events that trigger rewards or promotions.

Glance is also in discussions with other companies whereby Glance may accept other new cryptocurrencies as an acceptance currency within the Glance Pay mobile payment platform. Glance is currently looking to expand its engineering team to include capabilities in blockchain development so that it may build out its own blockchain technologies.

On October 3, 2017, Glance announced an alliance with Netcoins Inc., to give people better access to both buying and spending bitcoin. Bitcoin currently can take many minutes or sometimes hours to complete a transaction. Glance may solve this problem by allowing bitcoins to be converted to Glance Dollars which can then be used to make lightning fast transactions using the Glance Pay app. Glance has several cryptocurrency and blockchain consultants on its advisory board, including Michael Vogel and Dominic Vogel (the founders of Netcoins) and Sprios Margaris, who has been recognized as the No. 1 top global Fintech influencer by Onalytica.com and No. 10 overall blockchain influencer by Right Relevance.

BTL Group Ltd. (OTC: BTLLF)Â focuses on chain connecting solutions powered by Interbit, which is a blockchain development platform designed for business innovators and developers to quickly and easily incorporate the best of blockchain capabilities into enterprise applications. “Interbit’s blockchain architecture was designed from the ground up with privacy, scalability, and security in mind. Satisfying the demands of enterprise clients has always been our primary concern. Our ability to join chains and control what is shared between them, enables features and functionality that previously required third party integrators and compromised the security and privacy of the network,” according to BTL Group.

MGT Capital Investments Inc. (OTCQB: MGTI) is a U.S. based Bitcoin miner. On October 2nd the company announced the commercial launch of its Sentinel network intrusion detection system. Orders will be accepted via the website, http://www.mgtsentinel.com . The MSRP per unit is $2,499, inclusive of one year of monitoring, and will ship on November 1, 2017. The Sentinel system, composed of a passive hardware device connected to each subnet, monitors network traffic for suspicious activity using sophisticated algorithms, generating an alert and deploying countermeasures when triggered.

Riot Blockchain Inc (NASDAQ: RIOT) intends to gain exposure to the blockchain ecosystem through targeted investments in the sector, with a primary focus on the bitcoin and Ethereum blockchains. “We are pleased to begin trading under the new RIOT symbol as we transform into a strategic investor and operator of blockchain technologies,” said Michael Beeghley, CEO of Riot Blockchain. “We want our company name, symbol and mission to embody the disruptive nature of this field and our commitment to the evolution of digital transactions.”

Overstock.com, Inc. (NASDAQ: OSTK) announced earlier this August an integration with ShapeShift, the world’s leading instant digital asset exchange, that allows customers to use all the major cryptocurrencies, including Ethereum, Litecoin, Dash, Monero, and the new Bitcoin Cash, to buy online from Overstock’s selection of nearly 4 million products. ShapeShift allows digital currencies to be easily converted between different coin types in a matter of seconds, all without any account setup or personal data required. “Overstock is pro-freedom, including the freedom of individuals to communicate information about value and scarcity without relying on a medium created through the fiat of unaccountable government mandarins. For that reason, we have been an early proponent and adopter of cryptocurrencies,” said company CEO and founder Patrick M. Byrne. “ShapeShift has provided an elegant way for users of any digital currency to transact seamlessly and privately across chains, and we’re excited to harness that ability to the benefit of our customers.”