Now upwards of 30% of employed workers nationwide, they may be the most vulnerable

Excerpts from a seminal report recently published by Cake & Arrow, a customer experience design and innovation company, which identifies new understanding of how the insurance industry approaches and relates to emerging generations. Reprinted here with permission. Access the full study here 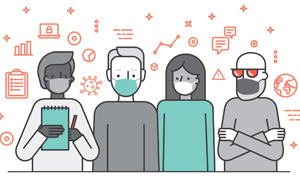 Back in 2017, Cake & Arrow published a research study exploring insurance and the gig economy (Cake & Arrow, 2017). In it, we took a look at how gig work is changing the makeup of the U.S. labor force and how the insurance industry might adapt.

The study placed particular emphasis upon how gig workers tended to fall outside of traditional models of insurance and social safety nets, both exposing these workers to greater risks than traditional workers while also creating opportunities for the industry to innovate new products and service models that better address the needs of changing workforce.

Fast forward to 2020, and while it may seem that everything has changed, very little has when it comes to protections for gig workers.

When the Covid-19 crisis hit the U.S., gig workers were just as underinsured, underemployed, and just as lacking in basic protections as they were when we surveyed them back in 2017. The pandemic currently sweeping the globe has not only shuttered the doors of millions of businesses, left many more millions unemployed, and overwhelmed our healthcare system, it has also brought renewed and intense focus to the vulnerabilities that underpin gig economy work, dramatically exposing just how little protections are in place for gig workers when faced with an unexpected crisis or emergency.

And while the effects of the pandemic are being felt across the globe, gig workers, and particularly those in the United States, have been hit especially hard. Here are some of the reasons why:

Although wage data on gig economy workers is notoriously difficult to find, like many Americans (as many as 78%, some studies find) (CareerBuilder, 2017), many gig economy workers live paycheck to paycheck. For those who are living paycheck to paycheck, losing even a single day of work can make the difference between paying rent, affording a utility bill, or buying groceries.

While itâs unclear precisely how many gig workers nationally are relying solely on gig work for employment, even those workers who supplement their incomes with gig work are at risk should their gig work diminish for any reason. Furthermore, living paycheck to paycheck doesnât only pose a financial risk to gig workers, it can potentially pose health risks too. Not only are those who live paycheck to paycheck more likely to skip going to the doctor when sick (American Psychological Association, 2019), but those who live paycheck to paycheck and rely on gig work to pay their bills are incentivized to continue working, even when they are sick, posing a risk to their own health and to that of society, as they risk spreading the disease (Economic Policy Institute, 2011).

In 2019, The U.S. Department of Labor issued advice concluding that gig economy workers are to be classified as independent contractors, not employees (Schieber, 2019), effectively stripping gig workers of the kind of entitlements afforded to regular employees – access to paid sick leave, employee-sponsored health insurance, workerâs comp and disability insurance.

When the Covid-19 crisis hit the U.S., gig workers were just as underinsured, underemployed, and just as lacking in basic protections as they were when we surveyed them back in 2017...

This means that unless they happen live in a state with a paid sick-leave policy, should a gig worker become sick due to Covid-19, unlike regular employees, they would not be eligible for paid sick leave, again incentivizing them to work while sick, putting both themselves at risk and those they come into contact with by not being able to adhere to stay-at-home orders.

There is a class divide amongst gig workers, leaving some much more exposed than others amidst the crisis
According to the gig economy research we conducted in 2017 (Cake & Arrow, 2017), we found that gig workers tend to fall into two categories: virtual laborers (those who derive their income from Internet-based work such as programming, design, writing, or marketing) and physical laborers (those who derive their income using their bodies or physical property, such as rideshare drivers, delivery workers, or AirBnb hosts).

Among the marked differences between these two groups was income, with those who fell into the virtual category tending to earn higher incomes. On paper, virtual laborers have no more protections than physical laborers, but due to higher incomes (and in the case of Covid-19, because many can work from home) they tend to be better insulated when crisis strikes.

Our recent survey found a similar divide between those who engage in professional or creative services as their primary gig work and everyone else. The workers engaging in professional services and creative work not only tended to have higher incomes than other types of gig workers, but generally found the crisis to be less disruptive. They ranked the disruption level as an 8.1 compared to the 8.9 of other workers. Similarly, just 19% of this group said they didnât realize how exposed they were, compared with 32% of everyone else.

Trust in Insurance Companies is Low and Declines with Income

While gig workers trust the federal government and insurance companies the least, our research found that the closer an institution or organization is to home, the more they tend to trust it. Community organizations were by far the most trusted followed by state or city government. When asked who they would first turn to for help amidst this crisis, we observed a similar pattern, with respondents ranking close family and friends as their top choices followed by state and city government. Here, insurance companies ranked dead last.