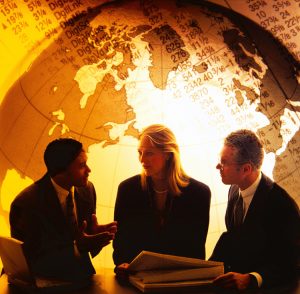 April 10, 2019 — NEW YORK–(BUSINESS WIRE)–Senior finance executives remain optimistic about the economy, the outlook for their companies and their investments for the future, despite economic and political uncertainty, according to the 2019 Global Business & Spending Outlook, a survey released today by American Express (NYSE: AXP) and Institutional Investor Thought Leadership Studio. Worldwide headcount is estimated to grow by 9.18% in 2019, and the vast majority of respondents (96%) expect to raise total compensation to employees. Nearly two-thirds (65%) of companies worldwide surveyed report higher or much higher revenue in the last 12 months, compared to 54% last year. In the U.S., 63% of respondents report higher revenues, up significantly from 36% last year.

The cross-industry findings in the joint American Express and Institutional Investor study are based on a survey of 901 CFOs and other senior finance executives of firms with annual revenues of $500 million or more, located in North America, Europe, Latin America, Asia, and Australia. The study was fielded in late November and December 2018. Now in its twelfth year, the survey this year includes the addition of Bahrain to the Middle East region.

Hiring Amid A Tight Pool for Talent

While headcount is expected to grow by 9.18% globally, survey respondents are more likely to have difficulty hiring and retaining talent but plan to hire aggressively to sustain growth. Aggressive hiring to increase their workforce by 10% or more is expected at 27% of companies in this yearâs study, up from 17% last year. The proportion of respondents in this most aggressive hiring segment rises in all regions except Asia, where it falls to 23% this year, down from 30% last year. In the U.S., the proportion of respondents anticipating employee growth of 10% or more has risen significantly to 31% this year, up from 2% last year.

While total compensation to employees is expected to rise by an estimated 5.22% this year, to attract and retain talent in the coming year, respondents will seek to improve the day-to-day work environment (58%), provide career development for their employees (51%) and to expand their health and retirement benefits (48%).

As a way to meet near-term staffing requirements in the coming year, companies in all regions will make greater use of temporary and contract workers (71%). Respondents also confirm their longer-term commitment to using contractors, freelancers, and temporary employees in this yearâs study. Seventy-five percent cite the use of these workers as central or important to their companyâs employment practices two years from now, up from 43% in 2018.

According to the survey, companies this year are most likely to spend moderately to support topline growth without placing profits at risk. Spending is estimated to grow by 8.15% across the entire response base. More than one in five (22%) U.S. finance executives will increase spending by 10% or greater (significantly up from 3% last year).

Despite operating in unsettled times, senior finance executives at large, global companies are concentrating on their day-to-day business but keeping an eye on the future...

As they prioritize their business goals, global finance executives are most likely to rate âbetter meeting customer needsâ (71%, unchanged from last year) as a top priority, followed by new market entry (45%), business transformation initiatives (38%) and defensive maneuvers such as remaining competitive against peer firms and protecting current market share (each, 37%). In the U.S., respondents will focus on better meeting the needs of customers (68%, down from 82% last year), remaining competitive with other companies (48%, up from 12% in 2018), and protecting share in current countries (42%, vs. 15% last year).

Companiesâ spending in pursuit of these objectives are most likely to focus on expanding production capacity (62%) and developing new products and services (58%). Notable increases in the proportion of respondents expecting to boost spending are expected in several categories, including hardware and IT infrastructure (59%, up from 32%), transportation and logistics (42%, up from 28%) and labor/headcount (36%, up from 24%).

When asked about the number-one technology spending priority, respondents say they are most likely to boost spending on data collection, warehousing and reporting. Nearly one-in-five (19%) cite this as their top spending priority, up from only 5% last year, followed closely by business intelligence and data analysis capabilities (18%, up from 6% last year).

Notably, senior finance executives are more likely to spend aggressively on training or hiring for the next generation of technology rather than on training or hiring focused on their current technology and systems. More than 40% anticipate spending aggressively for training their current staff on transformative technology. An identical proportion will go to the external labor market for expertise in next-gen IT to transform respondentsâ businesses and operating activity.

This yearâs study reveals growing concern for the dramatic impact of next-generation technology on competitive dynamics within industries (31%, up from 23% last year). Expectations for major disruption on company operations and performance (16%, compared to 18% last year) or on countries have waned (14%, down from 21% last year). Among those industries surveyed, the media entertainment/ travel (43%), wholesale/retail (41%) and construction (38%) industries are most likely to anticipate major disruption to their industryâs competitive dynamics. Latin America is more likely to foresee dramatic disruption to industry dynamics than any other region (44%, vs. only 10% last year).

Queried on the greatest technology challenge to their industry, senior finance executives in this yearâs study cite the use of artificial intelligence (52%) and the Internet of Things (IoT), which includes embedded sensors and ubiquitous, internet connected devices (48%). The U.S. is as likely to express concern for blockchain as artificial intelligence and IoT (each, 42%).

In line with their concerns and speculation about emerging technology, respondents are most likely to report having begun investment in artificial intelligence (62%), but they affirm the investment in robotics and automation (64%) has yielded the greatest benefit to their company.

Respondents from Europe are by far the most affected by the General Data Protection Regulation (GDPR), as 70% of respondents from the region, compared to 37% overall, see GDPR disrupting their systems, processes and decision-making abilities.

The 2019 Global Business & Spending Outlook was conducted by Institutional Investor Thought Leadership Studio (IITLS) and is based on a survey of 901 senior finance executives from companies around the world with annual revenues of $500 million or more. All survey responses were gathered in late November and December 2018. IITLS estimates the margin of error for the survey to be approximately +/-3.2% at a 95% level of confidence.