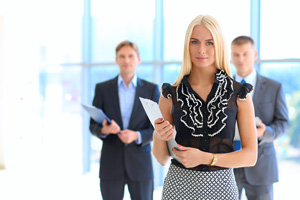 The study finds that women fall behind early and face ever-greater challenges the more senior they become.

Women are less likely to receive the first critical promotion to managerâso far fewer end up on the path to leadershipâand they are less likely to be hired into more senior positions. As a result, the higher you look in companies, the fewer women you see.

“When women are stuck, corporate America is stuck,” said Sheryl Sandberg, Facebook COO and founder of LeanIn.Org. “We know that diverse teams perform better and inclusive workplaces are better for all employees, so we all have strong incentives to get this right.”

The Women in the Workplace 2016 report is part of an ongoing partnership between McKinsey & Company and LeanIn.Org to give companies the information they need to promote female leadership and foster gender equality in the workplace. The study is based on pipeline data and information on human resources practices from 132 companies that employ more than 4.6 million people, including Visa, MetLife, JPMorgan Chase & Co., Procter & Gamble, Facebook, and General Motors. In addition, more than 34,000 employees completed a survey designed to explore their experiences regarding gender, opportunity, career, and work-life issues. The study builds on the Women in the Workplace 2015 report and a baseline study of sixty companies conducted by McKinsey & Company in 2012.

“To accelerate progress on gender parity, we first must understand what is holding women back,” said Dominic Barton, global managing partner of McKinsey & Company. “This study seeks to do exactly that. It provides companies with both industry benchmarks and data on their own talent pipeline and employees’ work experiences. These insights will help companies drive bolder and more effective solutions.”

Contrary to conventional wisdom, this year’s study found that women negotiate for promotions and raises as often as men, but face pushback when they do. They are far more likely than men who negotiate to receive feedback that they are “intimidating,” “too aggressive,” or “bossy.”

Women also receive informal feedback less frequently than menâdespite asking for it as oftenâand have less access to senior-level sponsors. So not surprisingly, women are almost three times more likely than men to think their gender will make it harder to get a raise, promotion, or chance to get ahead.

When women are stuck, corporate America is stuck.

The study found that, compared to white women, women of color face the most barriers and experience the steepest drop-offs with seniority despite having higher aspirations for becoming a top executive. Women of color also report they get less access to opportunities and see a workplace that is less fair and inclusive. They are 9% less likely to say they’ve received a challenging new assignment, 21% less likely to think the best opportunities go to the most deserving employees, and 10% less likely to feel comfortable being themselves as work.

The report identifies concrete steps companies can take to advance their gender diversity efforts. They can make a stronger case for gender diversity, explaining why it matters and how it benefits everyone. They can also ensure their hiring, promotion, and performance review polices are fair, and invest in training so employees know the steps they can take to promote gender diversity. And they can place more emphasis on accountability and set gender targets so it’s easier to track and make progress.

The complete Women in the Workplace 2016 report, including detailed findings and recommendations, is available here. From the website, organizations can download the report and sign up to participate in this ongoing research.

LeanIn.Org is the nonprofit organization founded by Facebook COO Sheryl Sandberg to empower all women to achieve their ambitions. LeanIn.Org offers inspiration and support through an online community, free education materials, and Lean In Circles, small peer groups that meet regularly to learn and grow together. The LeanIn.Org community now encompasses more than 1.2 million women and men and 29,000 Lean In Circles in more than 150 countries. LeanIn.Org is a private operating non-profit organization under IRS section 501(c)(3).

McKinsey & Company is a global management consulting firm, deeply committed to helping institutions in the private, public, and social sectors achieve lasting success. For more than eight decades, the firm’s primary objective has been to serve as our clients’ most trusted external advisor. With consultants in more than one hundred offices in sixty countries, across industries and functions, McKinsey & Company brings unparalleled expertise to clients anywhere in the world, working closely with teams at all levels of an organization to shape winning strategies, mobilize for change, build capabilities, and drive successful execution.