A Conversation With Aimee Johnson 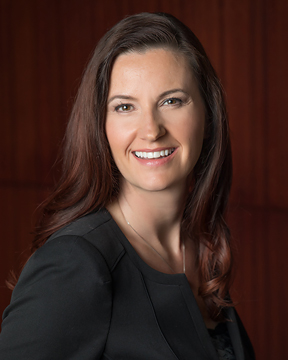 Mr. Kelley is managing editor for this magazine. Connect with him by e-mail: [email protected]

The idea of the âempowerment of womenâ would seem by now embedded in our culture, having germinated in protest in the 1960âs and becoming gradually codified into the consciousness of society, and ultimately into the fabric of our lives. But how engrained is it? Just how confident are women today in the quest for equal pay, the hope of career advancement and the potential for personal and economic mobility?

There may be some surprising attitudes counter-swirling behind the veneer of equality. In its seminal 2019 study, Women, Money & Power, Allianz Life sought to highlight evidence from its own body of knowledge that suggests a growing malaise among women that seems to challenge the very foundation of their empowerment.

We spoke with Aimee Johnson, vice-president of financial strategy at Allianz. The study, in part, has identified the emergence of a new and nagging angst, expressed by otherwise accomplished and successful women and shared throughout the strata of age, heritage and wealth. At the heart of it is a diminished sense of financial confidence, provoked by todayâs market volatility and validated by the persistent wage-gap and, perhaps, a seemingly reinforced glass ceiling.

PEK: Some of your data might suggest that the âempowermentâ of women, both in the workplace and in the home, may have suddenly lost momentum, and in certain demographic profiles even begun to regress. What are the historical events that are contributing to these changes?
AJ: Most people would agree that women have come a long way regarding our roles in both work and family. But there are a few factors that might be slowing financial confidence among women including market volatility. According to our recent Allianz Life Q2 Quarterly Market Perceptions Study, an increasing number of women are feeling angst about ongoing market fluctuations, and are growing worried about their nest egg.

Other factors that may be impacting how women are feeling about their financial situation include the large population that is near or in retirement, evolving career and family dynamics that are leaving women less time to focus on their financial strategy, and complications caused by both longevity and widowhood.

PEK: While âwomen in generalâ report having less earning power and less confidence in financial decision making, âdivorcedâ and âmillennialâ women report an increase in earning potential and confidence. What can we infer from these demographic disparities?
AJ: Millennial women and divorced women were two of the bright spots in the study in terms of their higher levels of reported earning power and financial confidence. Interestingly, more millennial women say they have the primary responsibility when it comes to managing finances and making financial decisions for their household (47% compared with 39% of Gen Xers and 37% of Baby Boomers). Divorced women also say they have more financial responsibility (85% when compared with single (78%) and married (28%) women). This shows us that when women take a larger role in managing finances – no matter their age or marital status â they feel more empowered.

PEK: Youâve identified âmarket volatilityâ as one of the culprits in how some women are feeling a loss of empowerment. Can you clarify some of the underlying fears that fuel this angst, such as recession, loss of job, etc.?
AJ: Recent ongoing market volatility is one of the reasons that could be impacting how women feel about their financial situations. The markets have been on a roller coaster ride lately, and watching hard-earned savings and retirement accounts drop could impact financial confidence.

In our recent Allianz Life Q2 Quarterly Market Perceptions Study, we found that 58% of women are worried that a major recession is right around the corner, and 47% are worried that a big market crash is on the horizon. In addition, four in 10 women say if the market dropped and they lost a lot of money, there is no way they could rebuild savings in time for retirement. These are real concerns for women today, and can weigh heavily on how they feel about their financial situation.

PEK: At its base level, the report seems to challenge the very underpinnings of âempowerment,â given that more women are graduating college than men, and that the wage-gap is narrowing to some degree. Still, youâve identified a disconnect that points to a need for âfemale financial empowerment.â How do you put something like this in motion?
AJ: One of the very first ways that women can start on their journey toward financial empowerment is just to talk about money. For so long we have thought of money as a taboo topic, and are scared to bring it up â whether thatâs with family or friends, or advocating for salaries we believe we deserve in the workplace.

Additionally, finding a financial professional who understands a womanâs unique family dynamics and specific needs and wants when it comes to finances can help put them on the right track toward boosting financial confidence.

PEK: Why arenât Millennial women worried about market volatility as Boomers and Gen-Xers? Is it simply that they have more time build wealth, or is it something deeper? Similarly, divorced women, especially those who are more than 10 years divorced, report a greater financial confidence. Why?
AJ: Millennial women may not be as worried because they do have a longer runway toward retirement. This generation of women also play a larger role in their household finances, and seem to be doing better overall in terms of earning power and asking for raises in the workplace, so may not be as worried about the effects of market volatility on their portfolio.
The rise in confidence among women who have been divorced for 10 or more years is also a sign that women who are taking on more responsibility and are the CFOs of their households have more confidence. Itâs an interesting correlation between the amount of time that women have been divorced and the rise in their financial confidence, and again goes to show that women who are more involved in their finances â whether by choice or due to a change in their marital status â have increased confidence and feel more financially secure.

PEK: Youâve identified that only 25% of women have financial advisors, down from 30% in the 2016 study. Moreover, the study implies that advisors may not fully grasp the unique challenges that women face today, with regard to their own financial empowerment, and, furthermore, may need to break through stereotypes within the advisor-client relationship. Can you comment on this?
AJ: We believe itâs important that women find the right financial planner for their specific situations. That could mean someone who has experience working with or even specializes in working with divorced women, widowed women, women who balance being the breadwinner and the roles of wife and mother, same-sex couples, single parents, and more.
Itâs important that people find a financial professional that they can trust. Many women arenât sure who to go to or who to trust. In some instances people donât think they have enough money to work with a financial professional. Women could start by asking a friend or a family for a referral to a financial professional, or they could interview financial advisors until they find the right fit.

PEK: Representation by a financial advisor appears to be quite low (25%- down from 30% in 2016). Did the report suggest reasons why?
AJ: Unfortunately, the study didnât suggest any reasons why that number is low. However, the study found that those with a financial advisor are more comfortable with the current market conditions and are ready to invest now (60%), compared to those that donât have an advisor (29%), even though market volatility is making both groups anxious.
In addition, financial advisor value to women continues to increase, as those without advisors have growing disparity in achieving financial goals. While those without financial advisors are setting more financial goals than they did in 2016, they often donât follow through (26% in 2016 vs. 32% in 2019).

PEK: Taken in its entirety, does the study imply any growing trends for women away from âempowermentâ and âfeeling financial secureâ or does it reflect instead reaction to the influences of our current financial climate?
AJ: The current financial climate, including ongoing volatility in the market, is one of the main reasons women may be feeling less financially secure.

Some additional trends that could point to why women are feeling less empowered and less financially secure include a growing number of people getting closer to retirement age, which might impact how people are feeling about their finances. In addition, women generally live longer than men, and more women are likely to live as widows, meaning they need to be prepared with a solid financial strategy that accounts for living longer, and often living longer without the financial support of their spouse. â