New research from the National Endowment for Financial Education (NEFE) reveals not only a savings shortfall, but growing incidence of disruptions to saving. 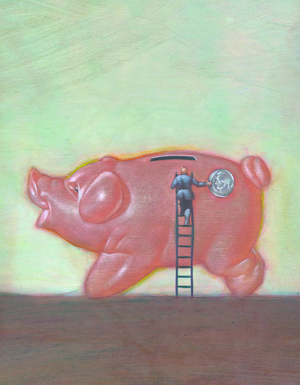 DENVERâAmericans of all income levels with a 401(k) are only saving about a third of the amount needed to maintain their living standards in retirement.

And theyâre frequently being told that the shortfall is their fault. But new research from The New School, commissioned by the National Endowment for Financial EducationÂ® (NEFEÂ®), finds that almost no one is safe from periods of lost income due to a health crisis, job loss or other life transitions during their working years.

In fact these income disruptions, defined as an annual earnings drop of more than 10 percent, are so common that 96 percent of Americans experience four or more of these income shocks by the time they reach age 70.

It won’t happen to me…

âThe story is more nuanced than simply saying Americans are failing at retirement savings,â says Ted Beck, president and CEO of NEFE. âNo one likes to believe that income shocks will happen to them. Yet this research shows that it is not a matter of if something will disrupt earnings, but when and how severe the effects of such shocks will be.â

Most retirement savings research looks for a single factorâsuch as medical expensesâto explain why individuals arenât saving enough for retirement. But this study by The New School, led by Teresa Ghilarducci, Ph.D., and Anthony Webb, Ph.D., takes into account the reality that income shocks such as unemployment, divorce and other earnings changes often cluster together; and the impacts from these shocks vary in magnitude depending on the personâs race and socioeconomic status.

The effect of being nonwhite is largely negative. Compared to their white peers, nonwhite workers had significantly lower retirement savings:

it is not a matter of if something will disrupt earnings, but when and how severe the effects of such shocks will be

Because the impact of life events depend heavily on the cushion one has in wealth and income, the sample also was divided into three income groups.

Bottom 50 Percent
Of those in the bottom 50 percent:

The middle and bottom groups are more likely to:

How Common Are Income Shocks?

The Effects of Income Shocks

Unsurprisingly, those in the middle- and lower-income groups are more likely to experience economic shocks from job loss or poor health and they are more negatively affected by earnings losses. For those lucky enough to have a retirement plan at all (only 7 percent of the bottom income group have defined contribution plans), these funds often are the only resource to turn to in times of financial need.

By far the most negative impacts come from declines in health, including long-term illness and work-limiting disability. When a low- or middle-income worker cannot work, or when their income decreases significantly for any reason, often they withdraw money from retirement savings accountsâand pay large penaltiesâor they stop contributing to their retirement savings altogether. Even decreasing the amount of their contributions can have lasting detrimental effects on savings momentum over time.

About the National Endowment for Financial Education
NEFE is an independent nonprofit organization committed to educating Americans about personal finance and empowering them to make positive and sound decisions to reach financial goals. For more information, visit www.nefe.org.