When It Comes To Being Aggressive On Wall Street, Women Face Double Standard

When do we depart from making âevidence-basedâ decisions?

A recent study from the American Accounting Association examines a perceived gender-based bias in ânot being persistent.’ Access the report here. 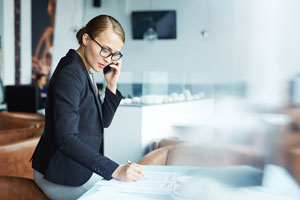 LAKEWOOD RANCH, Fla., April 19, 2021 /PRNewswire/ — A recent study finds that investment analysts who don’t aggressively push their recommendations are viewed more harshly if they are women, highlighting one way bias can creep into performance evaluations in the investment industry.

For the study, researchers enlisted 179 professional investors, had them read a scenario involving an analyst, and then asked the extent to which the scenario affected the analyst’s prospects for promotion. There were four variations on the scenario, which altered whether the analyst persisted or gave up after their investment recommendation was rejected, and whether the analyst was male or female.

“The research suggests that when a male analyst is not persistent, professional investors think his behavior is driven by the situation, and he must have a good reason for not persisting,” says Kristina Rennekamp, corresponding author of the study and an associate professor of accounting at Cornell. “But when a woman is not persistent, it is attributed to her being a woman, and she is perceived as not having the aggressive traits that are expected of a good analyst.”

“It’s not that being persistent is inherently advantageous â the investment may be a bad one,” says Blake Steenhoven, a recent Ph.D. graduate from Cornell who co-authored the study. “But, culturally, there is an expectation in the investment community that analysts should be confident and aggressive. However, that standard was really only applied when the analyst was a woman. The message seems to be ‘Lean in always, or else.'”

The researchers say that this bias likely stems from people relying on “categorization,” instead of making evidence-based decisions. Investment professionals expect financial analysts to be aggressive and confident. Those characteristics are similar to what many people expect of men, while women are often stereotyped as being deferential. As a result, when a male analyst behaves in an unexpected way â such as not persisting when their investment recommendation is rejected â their superiors are more likely to assume that the situation demanded it. But when a woman analyst behaves in the same unexpected way, they conclude that she doesn’t possess the necessary attributes of a successful analyst.

“One of the biggest challenges in managerial accounting is helping people evaluate their subordinates’ performance without bias,” says Robert Bloomfield, co-author of the study and Nicholas H. Noyes Professor of Management at Cornell. “The take-away message is: get good data about employees’ performance over time, and use it. Otherwise, you are likely to remember only what surprised you, and rely on shortcuts like what category the person falls into.

culturally, there is an expectation in the investment community that analysts should be confident and aggressive. However, that standard was really only applied when the analyst was a woman. The message seems to be 'Lean in always, or else...

“Our finding may surprise people,” Bloomfield adds, “because a lot of research suggests that women are seen as less likeable when they are aggressive. But you don’t need to be likable to be successful on Wall Street.”

The paper, “Penalties for Unexpected Behavior: Double Standards for Women in Finance,” appears in The Accounting Review. The paper was also co-authored by Scott Stewart, a clinical professor of finance and accounting at Cornell.

Excerpts From The Study

When objective measures are imperfect or unavailable, people evaluate performance by selecting subjective factors to incorporate into their judgments, deciding how to interpret and weigh each one. Because this process is so complex, evaluators often use categorization as a shortcut. They assign people to categories, like occupation, gender, age, race, etc., based on how much they seem like a typical member of those categories; they then base their judgments on the categories that fit best, relying heavily on how they expect typical category members to behave, rather than focusing entirely on the many subjective factors that speak directly to the individualâs performance and prospects.

When the person being evaluated acts in a surprising way, the evaluator may resolve the discrepancy by assigning the person to a different category for which the behavior would be less surprising. This can negatively impact performance evaluations if the new category suggests that an individual is not a good ââfitââ with the role.

Recategorization causes the individual to be viewed as a worse ââfitââ with the original category. However, if no explanatory categories are identified, then the behavior is attributed to factors unrelated to the individual. For example, an evaluator may identify elements of the context that would make the behavior more consistent with expectations. In this case, the individual is still considered a good ââfitââ with the original category.

In male-dominated fields, unexpected behavior includes behaving in a stereotypically female manner or failing to behave in a stereotypically male manner. For analysts, there are many activities in which agentic behaviors are likely to occur. In addition to the technical activities directed toward research, analysts must also persuade others to adopt their ideas. In these interpersonal settings, characteristics like persistence, forcefulness, and confidence provide an opportunity for analysts to demonstrate behavior consistent with the research analyst category

The American Accounting Association (www.aaahq.org) is the largest community of accountants in academia. Founded in 1916, we have a rich and reputable history built on leading-edge research and publications. The diversity of our membership creates a fertile environment for collaboration and innovation. Collectively, we shape the future of accounting through teaching, research and a powerful network, ensuring our position as thought leaders in accounting.