Cities as Engines of Economic Growth

How should cities think about financial viability, opportunity & sustainability 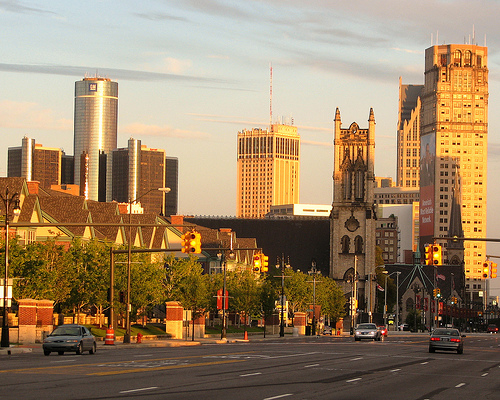 The report, Global Strength: At Work in Cities, features case studies of work the firm is doing to help cities address these challenges as well as innovative and sustainable solutions designed to create growth and opportunity.

“Strengthening local economies is essential to opening up access to opportunity,” said Jamie Dimon, Chairman and CEO, JPMorgan Chase & Co. “JPMorgan Chase is putting its resources to work – from financial to human capital – to help city leaders develop strategies that boost the economic vitality of their communities.”

The 2014 Corporate Responsibility report features case studies from many cities and perspectives from community and world leaders about how cities should think about sustainable economic growth. JPMorgan Chase’s work in cities is focused on removing barriers to opportunity and opening new pathways to success for economically disadvantaged communities, particularly in the areas of workforce readiness, financial capability, small business and community development.

This focus is evident in the firm’s work in Detroit. In 2014 JPMorgan Chase made a $100 million, five-year commitment to the city’s economic recovery. Drawing on JPMorgan Chase’s 80 years of business in Detroit, the firm is using its many resources – from its philanthropic and business resources to the expertise of its employees – to tackle issues ranging from workforce development to community and economic development.

“With over half of the world’s population now calling cities home, cities have become the center of society’s most pressing social, economic and environmental challenges,” said Peter Scher, Head of Corporate Responsibility, JPMorgan Chase. “JPMorgan Chase is making long-term investments in cities around the world to help them become engines of growth and shared prosperity. If cities thrive, our company will thrive – we must do our part.”

“Going global isn’t just how we do business in Atlanta, it’s critical in today’s economy,” said Atlanta Mayor Kasim Reed. “People and businesses are increasingly turning to cities for leadership, bold thinking, effective services and economic prosperity. At the end of the day, cities are where hope meets the streets.”

Demonstrating the scale of JPMorgan Chase’s philanthropic work around the world, the firm made over $200 million in contributions in 2014 to nonprofits in more than 44 countries. The report features how JPMorgan Chase used its many assets – from financial resources and business expertise to the talent of its employees – to bring new opportunities, solutions and ideas to cities:

With over half of the worldâs population now calling cities home, cities have become the center of societyâs most pressing social, economic and environmental challenges

For more information about corporate responsibility at JPMorgan Chase, or to read the report, please visit here.

JPMorgan Chase & Co. (NYSE:JPM) is a leading global financial services firm with assets of $2.6 trillion and operations worldwide. The firm is a leader in investment banking, financial services for consumers and small business, commercial banking, financial transaction processing, and asset management. A component of the Dow Jones Industrial Average, JPMorgan Chase & Co. serves millions of consumers in the United States and many of the world’s most prominent corporate, institutional and government clients under its J.P. Morgan and Chase brands. Information about JPMorgan Chase & Co. is available at www.jpmorganchase.com/.