Charting a Course for Insurance in Cuba, the 'Country That Time Forgot'

But will the market open-up to domestic insurers? 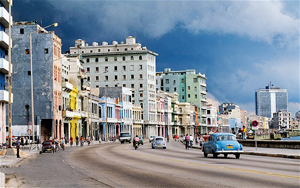 OLDWICK, N.J., August 18, 2016âThis A.M.BestTV episode explores how the thawing relationship between the United States and Cuba is revealing opportunities for insurance companies.

The United States and Cuba this year reopened diplomatic relations, which had been severed in 1961. As a result, markets for health, travel, agricultural, commercial and other insurance could form going forward in Cuba, which is home to hurricane, flood and earthquake risks.

âA.M. Best believes that as the industry opens, there are going to be good opportunities for foreign participants to enter the health insurance segment, alternative insurance, travel and agriculture,â said Alfonso Novelo, director of analytics, A.M. Best AmÃ©rica Latina.

âThe challenges for private insurers are significant, since Cuba is a disaster-prone country,â said Robert P. Hartwig, outgoing president of the Insurance Information Institute. âCuba regularly gets hurricanes, floods and even has some earthquake risk. However, these risks are ones that insurers understand, since they do insure Florida, the Gulf Coast, as well as other parts of the Caribbean and other parts of the world, which have similar sorts of disasters. I see the real challenges being ones of regulatory and legislative â¦ It is simply a country that time forgot. Every part of its economy is backward, including its financial services sector. â

Both Novelo and Hartwig agree that opening Cuba to insurers is a project that is going to take several decades to bear significant fruit.

It is simply a country that time forgot. Every part of its economy is backward, including its financial services sector

Recent episodes of A.M.BestTV include:

A.M.BestTV covers exclusive A.M. Best information and reports, targeted topics and key developments in the (re)insurance industry every Monday, Wednesday and Friday. Sign up for alerts of episodes at http://www.ambest.com/multimedia/ambtvsignup.html. View A.M.BestTV episodes at http://www.ambest.tv.
A.M. Best is the worldâs oldest and most authoritative insurance rating and information source. For more information, visit www.ambest.com.