A Change Will Do You Good

Nine steps to lead your team through uncertain times 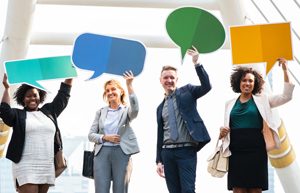 Ms. Zabriskie is the president of Business Training Works, Inc., a Maryland-based talent development firm. She and her team help businesses establish customer service strategies and train their people to live up to whatâs promised. For more information, visit www.businesstrainingworks.com.

If there is one thing about business that doesnât change, itâs that business will always change! Be it through the advent of new technology, loss of a key employee, new laws that govern the way your industry does business, or even a takeover by another company. No matter what the change may be, the last thing your team wants to hear from you is â¦

An effective leader will need to lead their team through any change that should occur and do so with confidence to inspire others to be confident as well. The transition should be as smooth as possible and be done so in a way that looks as if the change were already expected.

Employees and contractors may feel unsure and fearful about any new direction a business may be taking or change they are forced to deal with; so as their leader, their cues as to how to act and how to feel will come directly from you. As such, it is important that you have a solid action plan in place to deal with just such a scenario.

Below are nine tips to help you when leading your team through uncertain times:

Know that the path to the eventual goal is not always a linear one
As a team is dealing with change in the workplace, it is not as simple as announcing it, adapting to it, and moving toward goals. Employees and even leaders may have changing feelings about the process and that is normal. Recognizing and addressing these concerns as they arise is a healthy way to deal with them and is expected in a situation that may feel full ofturmoil or even traumatic at times.

Identify key leaders and stakeholders early in the process
As the process of change begins it is important to identify those in your team who represent true leadership qualities. They can be seen as stakeholders in the process and support you in your efforts to lead the team through the change and onto greater success. These individuals will be crucial in helping to instill confidence and keep the team moving together toward the stated goals.

Construct a solid plan
Even small changes need a plan. That plan should address changes in processes, products, and expectations of the people involved. If a change is drastic, you might have to construct an entirely new business plan. Creating a plan and sharing it with your team will go a long way toward giving them a feeling of stability as they move together in this new business environment.

Identify goals clearly
Failing to communicate clearly defined goals is one of the worst errors people can make when leading change. If employees donât have a firm sense of what they are moving toward, they may end up just â¦ moving. Clearly define objectives and how you will support your team in meeting them. Your key stakeholders as identified above will play a vital role here as they lead by example in making decisions and actions that support accomplishing these goals.

There will be times when even an effectively created plan will hit a stumbling block, or even come to a screeching halt. Donât hide challenges when they occur; instead, share them with your team. They may have valuable input and will feel more invested in helping to overcome any obstacles as you bring them into the discussion...

Continually define and redefine the change as necessary
During a time of uncertainly, rumors abound. When your team doesnât know some aspect concerning the change at hand, they will begin to speculate. This can lead to confusion, worry, and employees looking elsewhere for employment. The best plan of action is to be upfront and communicate with your team any information you have as you get it. Simply knowing what is going on will instill confidence and quell fears, even if the information is not all that good to begin with.

Donât discount the past
Oftentimes, new changes mean discarding the old ways of doing things, and projects once seen as vital are âkicked to the curbâ so to speak. This can leave those team members who worked on such projects feeling slighted and that their contributions were worthless. An effective team leader will highlight such projects and give credence to past accomplishments as jobs well done, while at the same time leading the team into the new direction.

Donât hide the challenges
There will be times when even an effectively created plan will hit a stumbling block, or even come to a screeching halt. Donât hide challenges when they occur; instead, share them with your team. They may have valuable input and will feel more invested in helping to overcome any obstacles as you bring them into the discussion.

Carefully listen to all concerns
One issue that many leaders fail at is truly listening to their team. They may take a âthis is the way it is now, so deal with itâ approach and this can do much to lower morale and make team members feel defeated in an already scary situation. Instead, make yourself available to your team and listen to them. Sometimes, simply venting about the changing environment will do wonders to help someone deal with what is going on. And other times, their insight could be invaluable in helping you do your job as well.

Clearly state new or adjusted performance objectives
Of all the things that will affect the changing workplace environment, uncertainty among team members can be the greatest obstacle to overcome. One way to combat that early on is to clearly state any changes in performance objectives and reviews. Employees will want to know exactly how and when they will be reviewed and what criteria will be a factor as well. This will allow them to focus on their own objectives and give them a sense of confidence as they move through the changing environment.

Change can be scary, full of surprises, and extremely challenging at times. But, if you have a plan of action, communicate effectively with your team, and move towards new objectives with confidence and a team that is committed as well, you can survive and even thrive in the new adjusted business environment.