Business Executives Show Concern About U.S. Economy but Confidence in Own Companies

Survey: Almost half of respondents say their companies will boost pay because of tight labor market
Availability of skilled personnel is top challenge for sixth quarter in a row 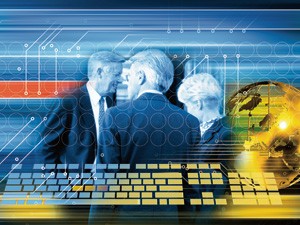 December 06, 2018 —Â NEW YORK–(BUSINESS WIRE)–Business executivesâ outlook on the U.S. economy fell sharply in the past quarter, but they continue to hold strongly positive views of their own companiesâ prospects, according to the fourth-quarter AICPA Economic Outlook Survey, which polls chief executive officers, chief financial officers, controllers and other certified public accountants in U.S. companies who hold executive and senior management accounting roles.

Some 57 percent of survey respondents expressed optimism about the U.S. economy over the next 12 months, down 12 percentage points from last quarter and a steep decline from the post-recession high of 79 percent set at the start of the year. Trade issues and rising interest rates were cited as factors for the decline this quarter, along with concern about the U.S. deficit and underlying issues such as corporate and personal debt levels. The survey was conducted after the recent midterm elections.

Business executivesâ outlook for their own companies held relatively firm at 69 percent, a decline of a single percentage point from last quarter. In a similar vein, survey respondents who said they expected their organizations to expand in the next 12 months fell from 70 percent to 67 percent, a rate that remains high from a historical perspective.

âWe see continued concern about potential trade conflicts and the impact of interest rate changes,â said Arleen R. Thomas, CPA, CGMA, managing director of Americas and CGMA Global Offerings for the Association of International Certified Professional Accountants. âStill, even though business executives are taking a more tempered view of revenue and profit growth in the coming year and expect to rein in spending in some areas, they maintain fairly broad optimism about business expansion and their own companiesâ prospects.â

Availability of skilled personnel remains the top challenge for businesses, a position it has occupied since the third quarter of 2017. Almost half of survey respondents (48 percent) said they planned salary, wage or commission increases in the next 12 months to help retention and recruitment amid the tight labor market. A majority (62 percent) of those who said they planned increases said they expected these to fall in the three to five percent range.

Hiring plans continue to be strong, although many companies say they face a scarcity of candidates with the right skills and experience. Overall, half of business executives said their companies currently have the right number of employees. Of the 42 percent who have too few employees, some 14 percent said they were reluctant to hire, while 28 percent said they planned to hire immediately.

The AICPA survey is a forward-looking indicator that tracks hiring and business-related expectations for the next 12 months. In comparison, the U.S. Department of Laborâs November employment report, scheduled for release tomorrow, looks back on the previous monthâs hiring trends.

The CPA Outlook Indexâa comprehensive gauge of executive sentiment within the AICPA surveyâ fell three points to 76, its lowest level since the second quarter of 2017 but still strongly positive. The index is a composite of nine, equally weighted survey measures set on a scale of 0 to 100, with 50 considered neutral and greater numbers signifying positive sentiment. All nine components of the index fell this quarter, with the biggest shift an eight-point drop in U.S. economic optimism.

Inflation worries remained consistent with last quarter, with almost half (49 percent) of respondents expressing concern. Labor costs are seen as the biggest potential contributor to that concern...

The fourth-quarter AICPA Business and Industry Economic Outlook Survey was conducted from Nov. 7-28 and included 938 qualified responses from CPAs who hold leadership positions, such as chief financial officer or controller, in their companies. The overall margin of error is less than 3 percentage points. A copy of the report can be found on aicpa.org.

The Association of International Certified Professional Accountants (the Association) is the most influential body of professional accountants, combining the strengths of the American Institute of CPAs (AICPA) and The Chartered Institute of Management Accountants (CIMA) to power opportunity, trust and prosperity for people, businesses and economies worldwide. It represents 667,000 members and students across 184 counties and territories in public and management accounting and advocates for the public interest and business sustainability on current and emerging issues. With broad reach, rigor and resources, the Association advances the reputation, employability and quality of CPAs, CGMAs and accounting and finance professionals globally.