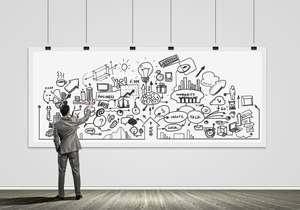 Seventy-nine percent of business executives said they were upbeat about prospects for the economy, eclipsing last quarterâs post-Great Recession high of 74 percent. As a point of reference, optimism levels were as low as 28 percent in early 2016. Survey respondentsâ view of their own companiesâ outlook over the next 12 months also set a post-recession record, with 71 percent expressing optimism.

The increase in concern about inflation is particularly acute, with 49 percent of business executives saying they view it as more of a risk than deflation over the next six months. Thatâs up from 27 percent last quarter; in the previous five years, it had never exceeded 38 percent. The main inflationary risk factors cited are â in order â labor costs, raw material costs and interest rate hikes.

On the job front, half of business executives say their companies have the right number of employees. Hiring plans continue to improve, however, with 27 percent of companies saying they plan to fill positions immediately (up two percentage points from last quarter) and another 14 percent (up one percentage point) indicating they have too few employees but are hesitant to hire. Finding the right candidates remains an issue, however: âavailability of skilled personnelâ remains the No. 1 challenge for businesses for the third quarter in a row.

The AICPA survey is a forward-looking indicator that tracks hiring and business-related expectations for the next 12 months. In comparison, the U.S. Department of Laborâs February employment report, scheduled for release tomorrow, looks back on the previous monthâs hiring trends.

The CPA Outlook Indexâa comprehensive gauge of executive sentiment within the AICPA surveyâ rose two points in the fourth quarter to 81, a post-recession high. The index is a composite of nine, equally weighted survey measures set on a scale of 0 to 100, with 50 considered neutral and greater numbers signifying positive sentiment.

Asked about their take on potential interest rate hikes over the next 12 months, three-in-four business executives said they had at least a slight concern. But only 10 percent viewed this as a âsignificant concern.â

weâre seeing an uptick in concerns often associated with a hot economy, from talent pool issues to rising inflation fears

Most business executives (74 percent) said their companies hadnât yet passed on tax savings to workers in the form of pay increases or benefit changes. Of those that have, 12 percent increased salaries or wages, and just under five percent offered a one-time bonus.

The percentage of business executives who expect their company to expand in the coming year increased from 71 percent to 72 percent, a post-recession high.

Revenue and profit expectations for the next 12 months have grown every quarter over the past year, and now stand at 5 percent and 4.4 percent, respectively.

The first-quarter AICPA Business and Industry Economic Outlook Survey was conducted Feb. 6-21, 2018, and included 818 qualified responses from CPAs who hold leadership positions, such as chief financial officer or controller, in their companies. The overall margin of error is less than 3 percentage points. A copy of the report can be found on aicpa.org.

The American Institute of CPAs (AICPA) is the worldâs largest member association representing the CPA profession, with more than 418,000 members in 143 countries, and a history of serving the public interest since 1887. AICPA members represent many areas of practice, including business and industry, public practice, government, education and consulting. The AICPA sets ethical standards for its members and U.S. auditing standards for private companies, nonprofit organizations, federal, state and local governments. It develops and grades the Uniform CPA Examination, offers specialized credentials, builds the pipeline of future talent and drives professional competency development to advance the vitality, relevance and quality of the profession.

The Association of International Certified Professional Accountants (the Association) is the most influential body of professional accountants, combining the strengths of the American Institute of CPAs (AICPA) and The Chartered Institute of Management Accountants (CIMA) to power opportunity, trust and prosperity for people, businesses and economies worldwide. It represents 650,000 members and students in public and management accounting and advocates for the public interest and business sustainability on current and emerging issues. With broad reach, rigor and resources, the Association advances the reputation, employability and quality of CPAs, CGMAs and accounting and finance professionals globally.