Your Business Culture: Managing From Below 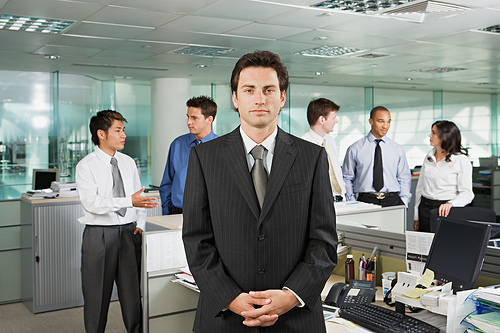 If you canât figure out why your company canât seem to shake its negative culture, look in the mirror. Authors Julie Miller and Brian Bedford explain why âas above, so belowâ is a universal phenomenonâand provide tips on how to create a culture of accountability from the top down.

Austin, TX (December 2013)âAlmost every leader has been there. One minute youâre living the company values, and the next youâre making an exceptionâfor yourself. Perhaps you have an official policy of being super-responsive, but when an especially problematic client calls, you avoid him for a day or two. Or despite a stated commitment to respectful communication, you lose it and shout at Margaret in sales when she falls short of her quarterly goal once again. Or you have a no-excuses policy on deadlines, but when you personally miss one, you just finesse the client into giving an extension.

It starts with you…

Sure, we all make mistakes. But Julie Miller and Brian Bedford say that if youâre not holding yourself accountable to the values you say are important, donât be surprised when your bad behavior starts to trickle downâand ultimately impacts the companyâs bottom line.

âEmployees pay attention to what you do, not what you say,â notes Miller, coauthor along with Bedford of Culture Without AccountabilityâWTF: Whatâs the Fix? ( www.millerbedford.com). âYour behavior makes clear what the real corporate values are. So when you or other higher-level leaders ignore the companyâs values, department managers think they can behave that way too. Meanwhile, employees will think they can ignore important change initiatives because management gets to ignore them.

âSoon youâve got a company of employees who act however they want,â she adds. âHigh performers wonât want to work in an environment like that. Theyâll leave. And what remains will be a company full of individuals promoting only their own self-interests. And as weâve seen with companies like Lehman Brothers, Enron, and Bear Stearns, that will only end badly.â

As above… so below

Company leaders, say the authors, should be aware of what they call the âas above, so belowâ phenomenon: the concept in which employees mirror the behaviors of the successful leaders they see above them. The rationale is simple: âIf they get ahead by behaving that way, then thatâs what Iâll do.â Thatâs great when leaders are acting with accountability but it becomes a big problem when leaders donât make accountability a priority.

Culture Without AccountabilityâWTF: Whatâs the Fix? explains what can happen when businesses, teams, families, and individuals shirk accountability. The book is full of real-life stories of what accountability looks like and what can go wrong in its absence. It offers a proven process for installing an accountability-based culture, a platform for success in business and in everyday life.

âTo be successful, a companyâs leaders must apply the relentless focus and commitment necessary to build the required culture and must serve as role models for the required behaviors,â says Bedford. âIn the end, the establishment of a culture is all about how leaders behave and what behaviors they reward and discourage.â

Read on to learn the four critical actions leaders must take in order to create a winning culture.

Hold yourself accountable
Miller and Bedford give the example of Sir Alex Ferguson, the long-time coach of Manchester United soccer club, who held everyone, including himself, accountable to the credo âThe club is more important than any individual.â No matter how skilled or important they were, if a player didnât follow that rule, they were let go. Examples of his âno one is bigger than the clubâ ethic involved some of the biggest names in the clubâs history, including David Beckham, whose larger-than-life persona became a distraction.

SAF was quick to hold himself accountable to the same high standards. When United lost the Premier League title, by the narrowest of margins, at the end of the 2012 season, he blamed himself, not the players. And when the team exited from the Champions League (the competition he held in the highest regard of all) at an early stage in the same season, he blamed his own team selections and tactics.

...Employees pay attention to what you do, not what you say

âYou must hold yourself accountable to at least the same level of expectation you have for your employees,â says Miller. âA rule applies to everyone or it applies to no one. As a leader you must be keenly aware that everyone is watching you, and everything starts at the top.â

Spell out expectations to the letter
Without clear expectations, thereâs no way to hold someone accountable. You must make sure that each employee has a clear understanding of what is expected of them in the job he or she performs. That may mean going into detail that, on the surface, feels like overkillâbut isnât. Telling employees âItâs vital to me that I can always rely on you to do what you say youâll do. If you canât because circumstances have changed, let me know ASAP with a fix-it planâ sets a very clear expectation.

Know when to nourish your employees
Of his time at General Electric, Jack Welch once said, âMy main job was developing talent. I was a gardener providing water and other nourishment to our 750 people. Of course, I had to pull out some weeds, too.â Itâs clear that Welch knew the importance of holding people accountable. He had a standard for his employees, and anyone who didnât meet that standard would suffer the consequences. When mistakes are made, you can and should hold your people accountable. If you donât, they canât improve, and your company canât improve.

âOf course, holding people accountable isnât easy,â says Bedford. âYou have to tell your employees the truth. You canât do this without having conversations with people about what they are doing well and where they need to improve. This is where the accountability process breaks down most often. To cultivate a culture of accountability, you have to know when and how to provide nourishment so that your people can improve just as Welch did at GE.â

Hone the art of instant feedback
Miller and Bedford talk a lot about feedback in their book, because itâs so important. Most people donât like giving feedback, and they like getting it even less! But you canât hold people accountable without it. And Miller insists that for feedback to be productive, it must be shared regularly and without delay.

âIf this practice becomes part of the culture, your people will come to expect it and not feel that itâs anything unusual,â she explains. âLeaders should share impressions as soon as they see the behavior they would like to encourage or discourage. Make sure feedback is specific, focusing on the particular issue or behavior in question. If a leader will focus on what the person actually said or didâthe facts and nothing but the factsâwithout labeling the employee or the action, the employee will be more likely to hear and heed the feedback.

âYou can also use the S.I.S. Feedback Model,â she adds. âIt is a straightforward and objective process in which you first describe the situation, then explain what impact it had, and then suggest ways to stop (or continue) the behavior. The model teaches people to focus on the factsâwhat the person said or didâand the positive or negative consequence of those actions without resorting to name-calling or other inflammatory language, which will only add fuel to the fire.â

âIn order to establish a culture of accountability, there can be no double standard,â concludes Bedford. âLeaders and employees must follow the same set of rules; otherwise the whole system breaks down. The good news is that when leaders commit to role modeling the right behaviors, their employees will follow.â

About the Authors:
In 2001, drawing on their respective years of experience in senior global leadership at Motorola, Julie Miller and Brian Bedford joined forces to establish MillerBedford Executive Solutions. MillerBedford helps businesses and organizations improve strategy, culture, and leadership, while addressing issues that limit success. And their clients actually have fun in the process!