A Bullish View for 2019 IPO Market

But will shutdown impact linger? 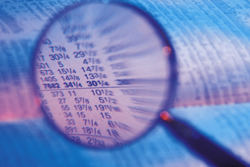 February 05, 2019 —Â CHICAGO–(BUSINESS WIRE)–Bankers are feeling confident about a strong IPO market in 2019, despite expectations of economic volatility, market corrections, and other risks, according to a new survey from BDO USA, LLP, one of the nationâs leading accounting and advisory firms.

Most (71 percent) of the capital market executives at leading investment banks surveyed believe IPO activity in 2019 will increase or stay roughly level with 2018, which was the best year for IPOs since 2014. Sixty-one percent believe the average size of U.S. IPOs will fall in the $200 million to $299 million rangeâin-line with 2018 averages. Bankers were interviewed in December 2018, a time when market corrections were already underway; yet, they retained their optimism despite 52 percent expecting further market corrections in 2019.

âEconomic signals are mixed, but there are compelling positivesâemployment figures are strong, market dips often lead to rallies, and major companies like Uber and Lyft appear to be moving forward with their IPO plans,â said Lee Duran, partner in the Capital Markets practice of BDO USA. âOne wild card is the government shutdown. With the SEC delays in completing reviews, Q1 results may lag, but long-term growth opportunities could still drive a comeback.â

The Hot Spots for Action

Thirty-seven percent of bankers expect that private equity portfolios will generate the most IPOs this year, followed closely by the 35 percent that anticipate venture capital will be the top source.

âWhile PE funds will likely continue to see IPOs as an exit opportunity in 2019, funds are also swooping in to acquire pre-IPO companies, particularly in the tech sector. Though we still see ample opportunity ahead for IPOs, with the market in question and private financing still available, M&A may be another popular strategy.â -Scott Hendon, partner and national Private Equity practice leader at BDO USA, LLP

Bankersâ expectations for the IPO market also vary by industry. The technology, biotechnology and healthcare industries are projected to see the biggest increases in IPO activity in 2019. Bankers anticipate that filings among consumer retail and energy companies will decline. Although expectations are tempered for the manufacturing and industrials sector in 2019, which is still contending with tariff issues, itâs another area to watch, since it produced five of the largest IPOs in 2018.

71% of capital markets executives are feeling confident about a strong IPO market in 2019, despite the government shutdown, expectations of economic volatility, market corrections, and other risks...

With tech and biotech companies positioned as some of the most highly valued companies in 2019, itâs not surprising that bankers ranked long-term growth potential (36 percent) and an innovative offering or product (29 percent) as the two factors that hold the greatest value for investors. Long-term growth is a bigger pressure point for larger deals, with 60 percent of bulge bracket bankers citing it as the most valued factor.

Will the Unicorns Dazzle?

Expectations for the technology sector are particularly high, with all eyes on the pipeline of promising start-ups awaiting their IPO debuts in 2019, including Uber, Lyft, Airbnb, Pinterest and WeWork. Twelve percent of bankers say the pricing of one of these unicorns is the factor most likely to spur increased IPO activity this year. Positive returns from new offerings will likely set the stage for the remainder of the year.

Other major findings of the 2019 BDO IPO Outlook Survey:

A Recipe for Continued Success?
Bankers believe the pro-business climate of the Trump administration, increased confidence in the U.S. economy, and strong performance from IPOs were the three biggest success factors driving the 2018 IPO market. Continued positive returns and regulatory rollbacks under the Trump administration are expected to have the biggest influence on activity in the year ahead. On the other hand, bankers cited global political and economic instability (29 percent) and Federal Reserve rate hikes (24 percent) as the greatest threats to a healthy IPO market this year. Of note, bankers were surveyed just days before the record-long shutdown took effect, which delayed IPOs slated for the beginning of the year.

ICOs Fizzle
While 2018 saw an uptick in initial coin offerings (ICOs) over the prior year, they produced dwindling returns. Most bankers do not view ICOs as a threat to traditional IPOsâonly 12 percent expressed concern in this yearâs survey, down from 19 percent in 2017.

IPO Alternatives
Regulation A+ offerings are viewed as an attractive alternative for smaller companies, with 52 percent of bankers expecting to see greater interest in 2019. 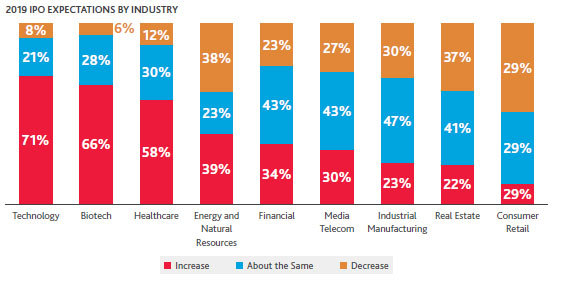 *Material discussed is meant to provide general information and should not be acted on without professional advice tailored to your firmâs individual needs.

About the 2019 BDO IPO Outlook Survey

The 2019 BDO IPO Outlook Survey is based on a national telephone survey conducted by Market Measurement, Inc., on behalf of the Capital Markets Practice of BDO USA. Executive interviewers spoke directly to 100 capital markets executives at leading investment banks regarding the market for initial public offerings in the United States in the coming year. The survey, which took place in December of 2018, was conducted within a scientifically-developed, pure random sample of the nation’s leading investment banks.

BDO USA is a valued business advisor to businesses making a public securities offering. The firm works with a wide variety of clients, ranging from entrepreneurial businesses to multinational Fortune 500 corporations, on myriad accounting, tax and other financial issues.

BDO is the brand name for BDO USA, LLP, a U.S. professional services firm providing consulting, assurance, tax, and advisory services to a wide range of publicly traded and privately held companies. For more than 100 years, BDO has provided quality service through the active involvement of experienced and committed professionals. The firm serves clients through more than 60 offices and over 550 independent alliance firm locations nationwide. As an independent Member Firm of BDO International Limited, BDO serves multi-national clients through a global network of 73,800 people working out of 1,500 offices across 162 countries.

BDO USA, LLP, a Delaware limited liability partnership, is the U.S. member of BDO International Limited, a UK company limited by guarantee, and forms part of the international BDO network of independent member firms. BDO is the brand name for the BDO network and for each of the BDO Member Firms. For more information please visit: www.bdo.com.