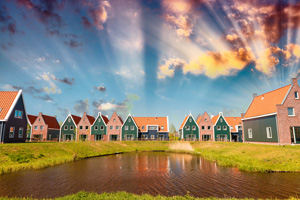 IRVINE, Calif., Feb. 3, 2022 /PRNewswire/ — ATTOM, a leading curator of real estate data nationwide for land and property data, today released its fourth-quarter 2021 U.S. Home Equity & Underwater Report, which shows that 41.9 percent of mortgaged residential properties in the United States were considered equity-rich in the fourth quarter, meaning that the combined estimated amount of loan balances secured by those properties was no more than 50 percent of their estimated market values.

The report also shows that just 3.1 percent of mortgaged homes, or one in 32, were considered seriously underwater in the fourth quarter of 2021, with a combined estimated balance of loans secured by the property of at least 25 percent more than the property’s estimated market value. That was down from 3.4 percent of all U.S. homes with a mortgage in the prior quarter and 5.4 percent, or one in 18 properties, a year earlier.

The latest gains at both ends of the equity scale came as the U.S. housing market concluded one of its best years in the past decade, even as the national economy was only gradually recovering from the worldwide Coronavirus pandemic that hit in 2020. The market surged amid a flood of new home buying spurred heavily by rock-bottom mortgage rates and a desire of many households to trade life in congested virus-prone locales for the wider spaces afforded by a house and yard.

As those buyers pursued a tight supply of properties for sale, the median national single-family home price shot up past $300,000. Typical values spiked more than 10 percent across most of the country last year. Equity improved as rising prices widened gaps between what homeowners owed on their mortgages and the value of the properties.

Some warning signs of a weakening foundation under the market have emerged in the second half of 2021 in the form of declining home affordability, rising foreclosures and falling investor profits. Economic inflation and the likelihood of interest rates going up this year pose additional concerns. But the fourth-quarter saw some of the biggest improvements in the past few years in the portions of mortgage payers who were either equity-rich or seriously underwater.

“Another quarter, another boost to the balance sheets of homeowners in most of the United States â that was the story from the fourth quarter of last year. As home prices kept rising, so did the equity built up in residential properties, to the point where close to half of all mortgage payers around the country found themselves in equity-rich territory,” said Todd Teta, chief product officer with ATTOM. “No doubt, there are market metrics that pose warnings about how long the boom can last and equity can keep improving. We keep watching those closely. But for now, homeowners are sitting pretty as the wealth they have tucked away in their homes keeps growing.”

Largest declines in underwater properties across South and Midwest

West continues to have largest shares of equity-rich homes; Midwest and South still have smallest

The highest levels of equity-rich properties around the U.S. remained in the West during the fourth quarter of 2021. Nine of the top 10 states with the highest levels in the fourth quarter were in that region, led by Idaho (66.7 percent of mortgaged homes were equity-rich), Vermont (64.8 percent), Utah (62.5 percent), Washington (58.6 percent) and Arizona (57.6 percent).

Twelve of the 15 states with the lowest percentages of equity-rich properties in the fourth quarter of 2021 were in the Midwest and South, led by Illinois (22.5 percent of mortgaged homes), Louisiana (22.5 percent), Alaska (23.9 percent), Wyoming (24.5 percent) and Mississippi (26.3 percent).

Among 106 metropolitan statistical areas with a population greater than 500,000, the top 20 with the highest shares of mortgaged properties that were equity-rich in the fourth quarter of 2021 were in the West and South. The top five were Austin, TX (70.6 percent equity-rich); Boise, ID (67.3 percent); San Jose, CA (66.1 percent); Spokane, WA (64.1 percent) and Salt Lake City, UT (64 percent). While Austin again led the South and Boise led the West, the leader in the Northeast region remained Boston, MA (50.6 percent), while the top metro in the Midwest continued to be Grand Rapids, MI (46.6 percent).

As home prices kept rising, so did the equity built up in residential properties, to the point where close to half of all mortgage payers around the country found themselves in equity-rich territory...

The portion of mortgaged homes considered equity rich rose from the third quarter of 2021 to the fourth quarter of 2021 in 101 the 106 metro areas analyzed (95 percent) while all but two (98 percent) improved year over year.

At least half of all properties considered equity-rich in almost 2,500 zip codes

Among 8,651 U.S. zip codes that had at least 2,000 residential properties with mortgages in the fourth quarter of 2021, there were 2,466 (29 percent) where at least half the mortgaged properties were equity-rich.

Nine of the 10 states with the highest shares of mortgages that were seriously underwater in the fourth quarter of 2021 were in the South and Midwest. The top five were Wyoming (14.3 percent seriously underwater), Mississippi (12.2 percent), Louisiana (10 percent), Illinois (7.1 percent) and Iowa (7 percent).

Among the 106 metro areas, 92 (87 percent) showed a decrease in levels of seriously underwater properties from the third to the fourth quarter of 2021. Seriously underwater rates dropped, year over year, in 102 of those areas (96 percent).

Among 8,651 U.S. zip codes that had at least 2,000 homes with mortgages in the fourth quarter of 2021, there were only 18 locations where more than 25 percent of mortgaged properties were seriously underwater. Four of the 18 were in Cleveland, OH.

The ATTOM U.S. Home Equity & Underwater report provides counts of properties based on several categories of equity â or loan to value (LTV) â at the state, metro, county and zip code level, along with the percentage of total properties with a mortgage that each equity category represents. The equity/LTV is calculated based on record-level loan model estimating position and amount of loans secured by a property and a record-level automated valuation model (AVM) derived from publicly recorded mortgage and deed of trust data collected and licensed by ATTOM nationwide for more than 155 million U.S. properties. The ATTOM Home Equity and Underwater report has been updated and modified to better reflect a housing market focused on the traditional home buying process. ATTOM found that markets where investors were more prominent, they would offset the loan to value ratio due to sales involving multiple properties with a single jumbo loan encompassing all of the properties. Therefore, going forward such activity is now excluded from the reports in order to provide traditional consumer home purchase and loan activity.

Definitions
Seriously underwater: Loan to value ratio of 125 percent or above, meaning the property owner owed at least 25 percent more than the estimated market value of the property.

Equity-rich: Loan to value ratio of 50 percent or lower, meaning the property owner had at least 50 percent equity.