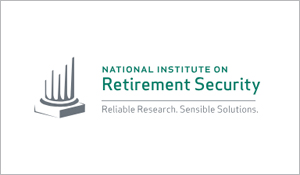 WASHINGTON, D.C., February 6, 2019 – Diane Oakley, executive director of the National Institute on Retirement Security, testified yesterday before the U.S. House of Representatives Ways and Means Committee at a hearing,Â Improving Retirement Security for America’s Workers.Â Oakley provided committee members with an overview of the fundamental changes to the nation’s retirement system that have made it increasingly difficult for Americans to prepare for retirement. She discussed how the disappearance of pensions and declining workplace retirement plan coverage means that Americans have a dim retirement outlook.

She also provided insight on how the deep retirement savings shortfall means that many Americans will face the prospect of continuing to work well into their 60s, a substantially reduced standard of living, and/or the need to turn to families or government for financial assistance. Ultimately, the inability of older Americans to be self-sufficient after a lifetime of work will have negative impacts on the U.S. economy, government budgets and families.

The testimony will provide committee members with insight on bold actions that can be taken to improve the retirement outlook for working Americans.

Excerpts from the testimony

Sources of Income for Todayâs Older American
Having a reliable source of income provides retirees with financial security and predictability, In particular, Social Security and DB pensions provide a stable monthly income that does not fluctuate during an economic downturn, and retirees can consistently maintain their level of spending. When retirees spend their retirement checks, this supports economic activity in local and national economies. In fact, when retirees spent the $578 billion they received from DB pensions in 2016, this spending supported the jobs of 7.5 million other Americans(Boivie).

NIRS also found thatAmericans have continued to work beyond traditional retirement ages, and income from wages has become an increasing source of household income for older Americans, especially in the years between ages 65 and 69(J. Brown, et al., 2016).The Elder Economic Security Standard Index (Elder Index), which is a benchmark developed by Gerontology Institute at the University of Massachusetts Boston, reflects the cost of basic living expenses and falls above the poverty level set by the U.S. government.

NIRS used the Elder Index to measure how well the median income of older Americans can meet the basic living needs. Calculated for both individuals and couples, the Elder Indexâs expense estimates vary depending on home ownership status. For example in 2013, the Elder Index indicates that $24,024 was needed for a single renter to meet basic expenses and $34,920 would be needed for a couple (Gerontology Institute).NIRS found that the median household income was $48,280 for males and $35,810 for females among Americans over age 65 using 2013 data from the Survey of Income and Plan Participation (SIPP)(J. Brown, et al., 2016).

The amounts and sources of typical household income vary by gender, age, income and marital status. With the exception of households that had incomes of $60,000 or more, Social Security payments provided the largest share of income for males and females regardless of age or marital status. We also found that income from a DB pension income provided about one-fifth of household income across gender, age and marital status. Distributions from DC plans were a modest source of income for current older Americans comprising one to three percent of income for households with incomes under $80,000. Wage income varied the most widely across the subgroups, being the largest source of income among those with the higher incomes. Also wage income as a source of household income declined with age while income from social security became a greater source of income. The Figure 1illustrates how the sources of income change based on age while also showing the amount of median income for older Americans males and females in each age subgroup(J. Brown, et al., 2016)

Retirement Plan Access and Coverage
Employer-sponsored retirement plans are the most important vehicle, after Social Security, for providing retirement income to most American workers. However, a large share lacks access to a retirement plan through an employer. This is a concern because individuals are 15 times more likely to own a retirement account through employer-sponsored plans than they are to save on their own in an IRA. (John and Koeing, 2014)

Employer-sponsored retirement plans are the most important vehicle, after Social Security, for providing retirement income to most American workers. However, a large share lacks access to a retirement plan through an employer...

The ability to save for retirement directly through an employerâs payroll when combined with automatic enrollment can transform coverage levels.(Jeszeck,2017).Access to employer-sponsored retirement plans among private sector wage and salary employees age 21 to 64 has fluctuated between 50to 60 percent during the last several decades according tothe Current Population Survey(CPS). Access reached a high point in 1999 when 60.4 percent of private employees worked for employers that offered retirement plans. However, after the 2001 recession and 2008 financial collapse access to retirement plans declined in the private sector and reached its lowest level with only 50.9 percent of workers having access in 2014 (J. Brown, et al., 2018).

Historical trends in pension coverage follow trends in plan access, but at lower levels as employers often limit their workersâ eligibility to participate in a retirement plan and employees can choose to participate in DC plans. Consequently, the share of the private sector wage and salary workers who participated in a retirement plan through their job decreased from 47.4 percent in 2001 to 40.1 percent in 2014(J. Brown, et al., 2018)

In comparison, access and coverage rates in the public sector are nearly universal. Moreover,93 percent of full-time employees participate in a public DB pension with only six percent participating in a DC only plan(Jeszeck, 2017).When todayâs workers, who more likely participate in a retirement plan with individual accounts in a 401(k) or other DC retirement savings plan rather than in group DB pensions, decide to retire, they will rely on the assets in those DC accounts and not the predictable monthly retirement income pensions pay to most current retirees.

Read more about NIRS research cited in the testimony, including:

Latinos’ Retirement Insecurity in the United States, which finds that only 31 percent of working age Latinos participate in workplace retirement plans, resulting in a median retirement account balance of $0.

Millennials and Retirement: Already Falling Short, which finds that this generation is far off-track when it comes to saving for retirement, and that 66 percent of working Millennials have nothing saved for retirement.

Retirement Security 2017: Americans’ Views of the Retirement Crisis, which finds that 76 percent of Americans are concerned about their ability to achieve a secure retirement, and some 88 percent agree that the nation faces a retirement crisis.

Shortchanged in Retirement: Continuing Challenges to Women’s Financial Future, which finds that women are 80 percent more likely than men to be impoverished at age 65 and older.

The full body of research is available at www.nirsonline.org.