Biodiversity And The Benefits For Human Health

Groundbreaking new research from SwissRe considers the correlation of risk-assessment and well-being – an initiative to understand how lifestyle and clinical factors might interact. Access the report here. 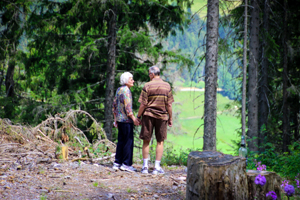 In their “Biodiversity and the benefits for human health” publication, Swiss Re Institute demonstrates just how beneficial time spent in nature can be for physical and mental well-being. Increasing access and improving green areas in cities and suburbs can reduce health effects caused by air pollution, excessive noise and extreme heat – and should be a priority for health care and disease prevention, policy making, nature conservation and urban development. And they do not have to rely on intuition. They have proof. The scientific literature is already rich and continues to grow with evidence of concrete health benefits conferred on study participants by their time spent in nature. Some of these studies have been captured in our ‘Biodiversity and the Benefits for Human Health’ publication.

“Nature itself is the best physician.” So stated Hippocrates, the Greek physician commonly known as the ‘father of medicine’. Intuitively, it is what most of us feel. Lazing by a beach, hiking over mountains, strolling through parks, lingering in woodland, cycling a winding bike path â they make us feel better, more relaxed, more at one with ourselves.

More than half of the world’s population currently live in urban areas, a figure that is projected to grow to more than two thirds by 2050. From a human angle, all will appreciate and enjoy well-designed and maintained urban green spaces. From a policy perspective, improving health as a result of being in nature reduces health care costs. In the US alone, healthcare costs in 2018 were USD 3.6 trillion, a figure rising well ahead of inflation. Improve health outcomes with green spaces in urban areas by just one or two percentage points, and the healthcare savings amount to in billions of dollars. These relationships are a call to integrate health, traffic, settlement and urban & rural zoning policies.

‘This, in turn, impacts re/insurers. They provide life and health insurance products to millions of consumers. They want our insured population to be healthy and happy, and to close health insurance protection gaps. Our ‘The Big Six’ Lifestyle Factors – an initiative to develop evidence-based understanding of how lifestyle and clinical factors interact with each other and affect people’s health – are an important step in reaching this goal. They include mental well-being, physical activity, environment, sleep, nutrition and substance use.

There are many factors contributing to healthy policy holders â and they firmly believe that increased access to improved green, biodiverse spaces is one of those. Bridging the story to property & casualty, insurance can provide a financial protection mechanism for the risks that greened environments face, whether green roofs against leakage due to heavy rain, or forestry insurance.

Biodiversity loss has emerged as a key factor impacting the environment along with climate change. As such, the report aims to display the benefits that increasing biodiversity could have on individualsâ mental health:

Mental Health: The global economic burden of mental illness was estimated at $2.5 trillion in 2010 and projected to reach $6 trillion by 2030. These losses manifest in loss of productivity in the workplace, reduced returns and loss of staff. Creating more parks and planting more trees would have outsized benefits for increasing biodiversity and improving peopleâs mental health, life satisfaction and happiness. As mentioned, if the financial impact of mental health conditions was reduced by just 1% through time spent in nature, it could result in $60 billion annual savings by 2030.

Cardiovascular disease (CVD): The global cost of CVD was estimated at $863 billion in 2010 with an expected increase to $1,044 billion by 2030. Urban green spaces are associated with less CVD and lower incidence of diabetes, and immersion in nature has been proven to help prevent or postpone CVD as well. Swiss Re estimates $10 billion in annual savings by 2030 if the financial impact of heart disease was reduced by just 1% through time spent in nature. Another key component of this benefit would be the reduction of air pollution.

Air Pollution & Heat: Air pollution is one of the major environmental risk factors, contributing to respiratory problems and lung cancer. The total amount of pollutants removed from U.S. trees and forests in 2010 was 17.4 million tons, representing a $6.8 billion reduction in human health costs, which emphasizes how nature-related elements in urban and suburban settings can benefit human health and increase economic savings. In addition, trees cool down cities and help prevent heat-induced mortality, which is increasing across the world due to climate change and frequent heatwaves.

‘The Big Six’ Lifestyle Factors: The biodiversity report aligns with an evidence-based initiative Swiss Re developed around lifestyle and clinical factors, including mental well-being, physical activity, environment, sleep, nutrition and substance use, which interact with each other and affect people’s health.

Ultimately, urban and suburban green areas cool, clean the air and provide space for relaxation while reducing heat and respiratory conditions and improving mental health. In order to better explain the positive effects on health and develop related insurance solutions.