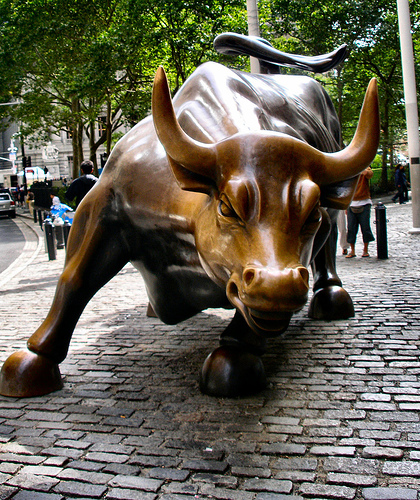 Markets ended a rollercoaster week on an upbeat note, giving the S&P 500 its biggest weekly gain in nearly two years and erasing December losses. Markets were pulled in different directions by several factors, including central bank actions, a deep slide in the Russian ruble, and further gyrations in oil markets. For the week, the S&P 500 gained 3.41%, the Dow grew 3.03%, and the Nasdaq added 2.40%.

However, Russia, one of the world’s major oil producers, felt the sting of falling oil prices. The Russian economy, which has been battered by economic sanctions over Ukraine, is in real trouble. Nervous currency traders caused a run on the Russian ruble, which fell an alarming 19% within one 24-hour period last week. Russia’s sinking economy is potentially a threat to its major trading partners, who depend on Russian demand for their goods. One report indicates that one in eight German companies are considering a withdrawal from Russia because of the risk represented by its unstable economy. A deteriorating economic situation could also escalate geopolitical tensions over the Ukraine.

...The Fed thinks that the economy is on track but doesn't want to spook investors by hiking up rates too soon

Investors cheered at the news that the Federal Reserve is likely to hold interest rates low for at least the first few months of 2015. Though the Fed feels confident enough about economic growth to raise rates next year, policymakers intend to remain “patient” by taking a slow approach to rate hikes. To translate: The Fed thinks that the economy is on track but doesn’t want to spook investors by hiking up rates too soon.

Looking ahead, it’s hard to know which way markets will go in the final weeks of the year. Historically, December has been a good month for equities, and stocks could be poised to go higher. In the plus column, the Fed promises continued low rates, plunging gas prices are putting more dollars in consumers’ wallets, and spirits about the future are high. In the minus column, investors could be jittery about the knock-on effects of falling oil and may be feeling uncertain about 2015.

As 2014 draws to a close, we want to thank you for the privilege of serving you this year. We are honored by the trust you place in our firm and sincerely appreciate the opportunity to work with you. We are excited about what 2015 will bring and look forward to continuing to support you and your family for many more years to come.