A new study released by Seniorly on the Best States for Older Workers in 2021 uses data from the Census, CDC, and Tax Foundation comparing every state across five categories: labor force participation, income, taxes, healthcare, and life expectancy. Visit www.seniorly.com. 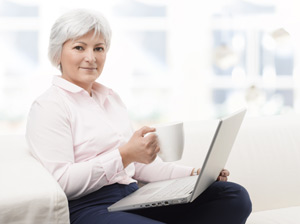 While many Americans are counting down the days until they retire, there are many reasons to remain in the workforce past age 67, which is when American workers can draw their full Social Security retirement benefit. For one, continuing to work helps build a more robust retirement portfolio, but many older workers may prefer to stay in the labor pool, whether because they love their work or because they want to remain part of a community. A survey of 2,000 professionals at or near retirement age found 70 percent need to work to pay for basic necessities, but almost 60 percent say they work because they enjoy it.

Whatever the reason, an unprecedented number of Americans are putting off retirement. The projected growth rate can also be attributed to the acceleration of remote work due to COVID-19. Many seniors are working from home doing data entry, bookkeeping, writing, human resources, and more.

Given the burgeoning trend, Seniorly wanted to find out which states are best for older workers. They compared Census, CDC, and Tax Foundation data for every state across five categories including labor force participation for older adults, income, taxes, healthcare, and life expectancy.

Wyoming had the best overall score in Seniorly’s analysis, ranking in the top half for every category except life expectancy, where it was 30th. Along with several other states, Wyoming levies no personal income tax, and more than 98 percent of those over 65 are on Medicare, which gives Wyoming the advantage.

South Dakota, another state with no income tax, took second, while income tax-less Washington and Alaska tied for third. Virginia was fifth, while North Dakota, Colorado, Hawaii, Virginia, and Nebraska rounded out the top 10.

The worst state for older workers is Kentucky, according to Seniorly’s analysis. Though the commonwealth ranked fourth when it comes to the percentage of older adults covered by Medicare, it ranks at or near the bottom for life expectancy, income, and labor force participation. 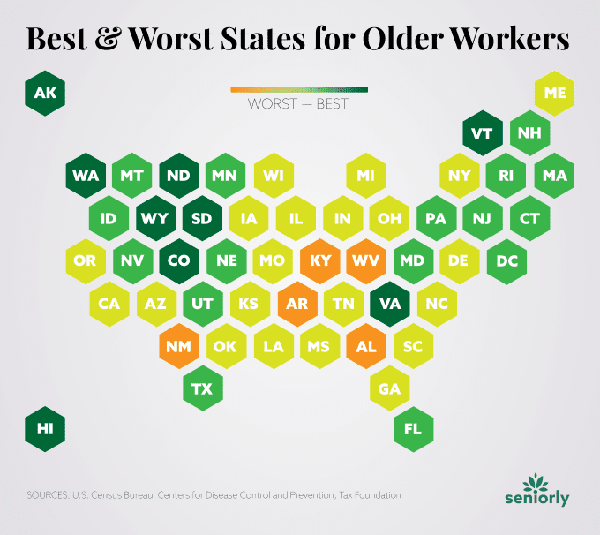 Nationally, older workers account for 6.6% of American workers, but that rate is expected to surge by nearly half through the end of this decade, as U.S. workers continue to remain in the workforce longer and longer. Just under 11 million older Americans are still participating in the labor force, whether full time or part time.

The District of Columbia and Vermont are tied for the highest percentage of labor force participation among those 65 and older, while West Virginiaâs rate is the lowest, followed by Alabama and Michigan.

One of the biggest reasons for older adults to put off retirement is so they can increase their Social Security checks when they decide to stop working, but some states are better than others when it comes to income and income taxes.

Nationally, older workers account for 6.6% of American workers, but that rate is expected to surge by nearly half through the end of this decade, as U.S. workers continue to remain in the workforce longer and longer...

Of course, how much of that money you get to keep after taxes is another important consideration for workers of all age groups. There are currently eight states that do not collect income taxes on most workers, while North Dakota and Oklahoma have the lowest median rates among states that do collect income tax. Californiaâs median income tax rate is the highest (almost 9 percent).

Part of being able to stay healthy well into your golden years, which means having access to healthcare. For the average person, that comes in the form of employer-provided health insurance coverage. Even if you remain working past the age of 65, older workers are still eligible to receive Medicare coverage, which may help close gaps in their employer-provided coverage or allow them to save on certain costs, including prescriptions and premiums. In all states, at least 90 percent of those over 65 are covered by Medicare, though Wyoming has the highest rate, 98.2 percent. D.C. has the lowest rate, 90.4%.

While some people may keep working because they have no choice, for many Americans, they would rather remain in the workforce for a few years for a variety of reasons. Seniorly’s analysis indicates that there are many states that would appear to be friendlier to older workers than others.

To create their analysis of which states are best and worst for older workers, Seniorly compared Census, CDC, and Tax Foundation data for every state across five categories:

Average life expectancy from birth, note: D.C. was not included in the data, so the average of all states was substituted for ranking purposes (here)

Percentage of people 65 and older covered by Medicare (here)