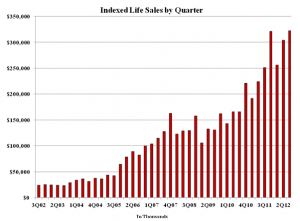 âThis quarterâs sales were only half of one percent lower than third quarter 2010âs record-setting indexed annuity sales levels,â said Sheryl J. Moore, President and CEO of Moore Market Intelligence, the firm that owns AnnuitySpecs.com. She closed by commenting, ââ¦and this is the lowest that indexed annuity caps and rates have ever been. What an amazing phenomenon!â

Worth noting this quarter was the fact that Allianz Life maintained their position as the #1 carrier in indexed annuities with a 14% market share. Aviva maintained their position as the second-ranked company in the market, while Security Benefit Life, American Equity, and Great American (GAFRI) rounded-out the top five, respectively. Security Benefit Lifeâs Total Value Annuity was the #1 selling indexed annuity for the quarter.

Although fixed interest rates continued their downward trend, Guaranteed Lifetime Withdrawal Benefit (GLWB) elections dropped for the third consecutive quarter. Moore pointed-out, âOne would assume that GLWBs would continue to increase in popularity as accumulation-based sales become more of a challenge. However, we cannot ignore the many, many changes that were made to these riders this quarter.â In the third quarter, there were four increases made to GLWB rider charges, eight reductions applied to the ridersâ rollups and sixteen different instances of reductions being made to the ridersâ payouts. The âde-riskingâ of these benefits over the quarter made income-based indexed annuity sales just as challenging as those based on accumulation.

For indexed life sales, 48 insurance carriers participated in the AnnuitySpecs.comâs Indexed Sales & Market Report, representing over 99% of production. Third quarter sales were $322.1 million, an increase of nearly 8% as compared to the previous quarter. In contrast to the same period in 2011, sales were up more than 28%. Ms. Moore remarked, âThis quarter was another record-setting quarter for indexed life sales.â She went on to comment, âNo doubt the fact that nine new companies have entered this market over the past year has contributed to the impressive sales. There were only a total of nine companies selling these products when I started this business seven years ago! I am projecting sales to exceed $1.1 billion of target for 2012 given the growth of this product line.â

This quarterâs sales were only half of one percent lower than third quarter 2010âs record-setting indexed annuity sales levels,â said Sheryl J. Moore, President and CEO of Moore Market Intelligence, the firm that owns AnnuitySpecs.com. She closed by commenting, ââ¦and this is the lowest that indexed annuity caps and rates have ever been. What an amazing phenomenon!

Items of interest in the indexed life market this quarter included Aviva retaining their #1 position in indexed life, with a 13% market share. Pacific Life took the position as second-ranked company in the market, while AXA Equitable, AEGON Companies, and National Life Group rounded-out the top five companies, respectively. AXA Equitableâs Athena Indexed UL was the #1 selling indexed life insurance product for the sixth consecutive quarter. The average target premium on indexed life declined to $8,700.00 for the quarter.

For more information go to www.IndexedRockstar.com.

The staff of Moore Market Intelligence has over a decade of experience working with indexed insurance products. The firm provides services in speaking, research, training, product development, and marketing of indexed annuities and indexed life insurance. Their knowledge in product filing research and policy forms analysis, coupled with their unmatched resources in insurance distribution, give them the expertise to provide competitive intelligence that allows carriers to stay ahead of their competition.

Sheryl J. Moore is president and CEO of this specialized third-party market research firm and the guiding force behind the industryâs most comprehensive indexed life and indexed annuity due diligence tools, AnnuitySpecs.com and LifeSpecs.com. Ms. Moore previously worked as market research analyst for top carriers in the indexed life and annuity industries. Her views on the direction on the indexed market are frequently heard in seminars and quoted by industry trade journals.