Americans Are Hanging on to Refunds This Tax Season

Still Cautious on the Economy, Employees Choose to Save Instead of Spend 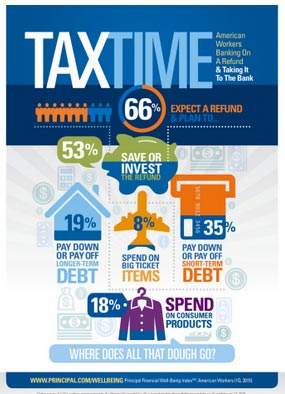 April 09, 2015 –  DES MOINES, Iowa–(BUSINESS WIRE)–As tax season winds down, American workers have cautious, but improved expectations about the economy, according to new research from the Principal Financial Group®.

Where does all that dough go?

The Principal Financial Well-Being IndexSM: American Workers found that while 44 percent of workers are cautious about the economic outlook for 2015, 34 percent (up 26 percent from Q1 of last year) still remain optimistic about their outlook, with just 11 percent of workers describing themselves as pessimistic this year. Half (49 percent) of American workers consider themselves financially healthy.

Amidst this guarded outlook, among the two-thirds (66 percent) of American workers expecting a tax refund, over half (53 percent) are choosing to save or invest it, a third (35 percent) plan to pay down or pay off short term debt and another one in one in five (19%) are choosing to pay off or pay down long-term debt. Eighteen percent of American workers expecting a refund plan on using it to buy consumer products, up from 13 percent last year.

“Even while Americans express some uncertainty about the future of our economy, it’s reassuring to see that overall pessimism is down,” said Luke Vandermillen, vice president at The Principal®. “The economy would benefit from increased consumer spending, but it is encouraging to see Americans are making prudent decisions with their money.” The study also found that Gen Y workers are decidedly more optimistic in their economic sentiment (48 percent) compared to Gen X workers (30 percent) and Baby Boomer workers (29 percent).

The Principal Financial Well-Being Index: American Workers surveyed more than 1,110 American workers working at small to mid-sized businesses across geographies and demographics. The Index is part of a series of quarterly studies commissioned by The Principal Knowledge Center examining the financial well-being of American workers, business owners and advisor opinions and practice management. The survey is conducted online by Harris Poll.

Saving at the Pump

Only 2 percent of American workers said they are saving more than $250 monthly from lower fuel costs. Four in ten are planning to use this extra money on regular expenses such as groceries, utilities or housing payments (40 percent). About one-third (31 percent) plan on using the surplus to pay off debt, while 23 percent plan to put their gas surplus towards an emergency savings fund.

For more research, analysis and insights, visit The Principal Knowledge Center and connect with us on Twitter.

About The Survey
This Principal Financial Well-Being IndexSM: American Workers survey was conducted online within the United States on the Principal Financial Group’s behalf by Harris Poll between February 9 and February 17, 2015 among 1,111 employees. This is one in a series of quarterly studies to identify and track changes in the workplace of small and mid-sized (growing) businesses.

The first Principal Financial Well-Being IndexSM survey was conducted in the United States in 2000. Employees consisted of adults 18+ who work at small and mid-sized (SMB) U.S. businesses (firm size 10-1,000 employees). About The Harris Poll Over the last 5 decades, Harris Polls have become media staples. With comprehensive experience and precise technique in public opinion polling, along with a proven track record of uncovering consumers’ motivations and behaviors, The Harris Poll has gained strong brand recognition around the world. The Harris Poll offers a diverse portfolio of proprietary client solutions to transform relevant insights into actionable foresight for a wide range of industries including health care, technology, public affairs, energy, telecommunications, financial services, insurance, media, retail, restaurant, and consumer packaged goods.