Almost half those students, if they had the choice to do over, said they would forgo the student loan 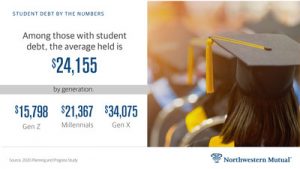 MILWAUKEE, June 24, 2020 /PRNewswire/ — The latest set of findings from Northwestern Mutual’s 2020 Planning & Progress Study highlights the impact that student debt can have on a financial plan. Among U.S. adults aged 18+ who hold student debt, the average amount is $24,155. The study also finds that 42% of Americans with student debt say that if they had to do it over, they wouldn’t take a student loan at all.

“Student loans are often a great way to make higher education accessible and affordable, but it’s important to approach any decision about debt as part of a long-term financial plan,” says Christian Mitchell, executive vice president & chief customer officer at Northwestern Mutual. “It’s also important to have a plan for managing debt after school ends, especially today as millions of students graduate and enter a job market with high unemployment and uncertainty resulting from the COVID-19 pandemic.”

The 2020 Planning & Progress Study finds that about 1 in 4 Gen Z (25%) and Millennials (24%) hold student debt compared to 16% of Gen Xers. Among those with student debt, younger generations have lower averages than Gen X:

The findings also show that the younger generations appear to be more optimistic about how long they expect to hold their student debt. Nearly half of both Gen Z (46%) and Millennials (47%) expect to pay off their student debt within one to five years, compared to 33% of Gen Xers. In contrast, 11% of Americans with student debt say they will be holding that debt for more than 20 years.

“These findings offer hints that younger people are aware of the long-term implications of carrying student loan debt and are taking steps to tackle it early,” continues Mitchell. “Those instincts are promising and will be critical at a time when so many Americans are facing a period of financial recovery.”

Two in five Americans (40%) say they did not have a proper understanding of the implications of taking on student debt when they elected to seek a loan, according to the research. Additionally, two-thirds (66%) say they would change something about their decision given the chance:

Among generations, Gen X and Millennials are more likely than Gen Z to say they would not have taken a loan at all (41%, 44% and 22%, respectively), while more than half of Gen Z say they would have borrowed less (57%). “Too often student loans fall to almost a default decision without thinking through the longer-term implications,” notes Mitchell. “While education is not necessarily something you can easily put a dollar value on, it’s also not something anyone wants to become a financial regret.”

These findings offer hints that younger people are aware of the long-term implications of carrying student loan debt and are taking steps to tackle it early...

Those with student loan debt also report receiving significant support from family members. Nearly one in six (16%) say their parents help to pay off their student debt. The younger generations report their parents help at slightly higher rates, with 31% of Gen Z and 19% of Millennials. In addition, 25% of Gen Xers and 22% of Millennials say their spouse/partner contributes to paying off their student loan debt.

“While some are in the position to have family members or others help with their student loan payments, not everyone has that option available to them,” says Mitchell. “Here again, we’re reminded of the importance of planning and managing debt over the long-term. Working with a trusted financial advisor can be a helpful hand to navigate that process.â

The latest findings from Northwestern Mutualâs 2020 Planning & Progress Study reveal that among Americans who carry debt, a third (33%) of their monthly income goes toward paying it off, exclusive of mortgages. Those with debt report having $26,621 on average, and 13% of Americans expect to be in debt the rest of their lives. Among U.S. adults carrying debt, 58% say it has a substantial or moderate impact on their ability to achieve long term financial security. Additionally, many report that debt impacts their ability to reach major financial milestones:

Signs of Progressâ¦Before the Storm

There are some positive indications in the data that suggest Americans have been making progress in their ability to manage and reduce debt over the last several years. But itâs important to note that this yearâs findings were collected just prior to the steepest impacts of the COVID-19 outbreak. Even so, it is worth noting the trend lines:

Credit card bills (22%) and mortgages (21%) are the leading sources of debt for Americans. Car loans (8%) and personal education loans (8%) came in as the next highest sources of debt.Of the 42% Americans who report holding credit card debt, the average amount is $5,400. Of that debt, over half (52%) went toward paying for absolute necessities like rent, utilities and groceries; 36% was for discretionary expenses such as entertainment, vacations, or dining out; and 11% was used for educational expenses. The study also found:

There also appears to be a bit of a learning curve when it comes to credit card usage. More than six in ten Americans with credit card debt (61%) said that if given the choice, they would have changed the way they used credit cards in the past.

The 2020 Planning & Progress Study is a research series conducted by The Harris Poll on behalf of Northwestern Mutual. This wave included 2,650 American adults aged 18 or older who participated in an online survey between February 12 â 25, 2020. A second wave of the study included 2,077 adults aged 18 or older who participated between April 29 â May 1, 2020. Results have been weighted to Census targets for education, age/gender, race/ethnicity, region and household income. Propensity score weighting was also used to adjust for respondents’ propensity to be online. No estimates of theoretical sampling error can be calculated; a full methodology is available.

Northwestern Mutual has been helping people and businesses achieve financial security for more than 160 years. Through a holistic planning approach, Northwestern Mutual combines the expertise of its financial professionals with a personalized digital experience and industry-leading products to help its clients plan for what’s most important. With $290.3 billion in total assets, $29.9 billion in revenues, and $1.9 trillion worth of life insurance protection in force, Northwestern Mutual delivers financial security to more than 4.6 million people with life, disability income and long-term care insurance, annuities, and brokerage and advisory services. The company manages more than $161 billion of investments owned by its clients and held or managed through its wealth management and investment services businesses. Northwestern Mutual ranks 102 on the 2020 FORTUNE 500 and is recognized by FORTUNEÂ® as one of the “World’s Most Admired” life insurance companies in 2020. Northwestern Mutual also received the highest score among individual life insurance providers in the J.D. Power 2019 U.S. Life Insurance Satisfaction Study.