Who is likely to pay the proposed Wall Street Tax? 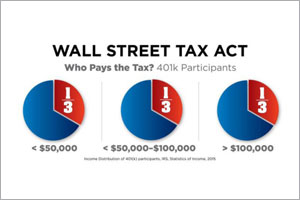 November 01, 2019 — ARLINGTON, Va.–(BUSINESS WIRE)–In November, Senator Elizabeth Warren (D-Mass) unveiled her plan to pay for âMedicare for Allâ â and itâs going to come right out of the retirement savings of the Middle Class. Warren, a Democratic presidential aspirant, claims to raise âabout $800 billionâ over the next ten years by what is called a âsmallâ tax on financial transactionsâ which would include the hard-earned money set aside in the retirement savings of millions of hard-working Americans.

The proposal includes a 10 basis point financial transaction tax that applies to American workersâ 401k plans. While it claims to have âlittle to no effectâ on most investors, consider:

A ‘Sweeping tax on Investments’

âContrary to what is being reported, the Warren proposal does, in fact, include a middle-class taxâa middle-class tax on retirement savings,â explained Brian Graff, CEO of the American Retirement Association.

Sadly, Warren is not the first presidential aspirant to seek to pay for their proposals with a sweeping tax on investment transactions with no apparent exception for retirement accounts, as previous proposals have incorporated. Earlier this year U.S. Senator Kamala Harris (D-Calif.) introduced a similar proposal to pay for her âMedicare for Allâ proposal. Likewise, Senator Bernie Sanders (I-Vt) has co-sponsored the Inclusive Prosperity Act of 2019, which claimed to generate up to $2.4 trillion in âpublic revenue from wealthy investorsâ to help pay for a program that would underwrite forgiveness of student loan debt.

Warren's Financial Transaction Tax tax would be a middle class tax on the hard-earned money set aside in the retirement savings of millions...

âEvery week millions of Americans sacrifice to set aside part of their hard-earned pay for retirement, investing those savings to help provide a secure financial future,â Graff notes. âAfter years of attacking 401(k) plan fees, some now want to charge a fee every time a hard-working American contributes out of their pay into their 401(k). Saving for retirement is hard work. And those in Washington shouldnât work to make it any harderâ.

About the American Retirement Association