In charge, independent, but stressed about money 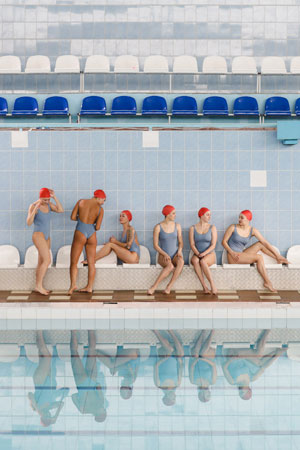 Ms. Statler is Chief Executive Officer (CEO) of the Alliance for Lifetime Income.

To provide financial professionals and their clients with unique insights and ideas to build retirement income strategies, the Alliance for Lifetime Income performs extensive research into the financial attitudes and behaviors of U.S. consumers. Our most recent effort produced the State of Women 2022, a three-chapter study focused on women and their finances, conducted in association with HerMoneyâa digital media company founded by leading personal finance expert Jean Chatzky, focused on improving the relationships women have with money.

According to McKinsey, as of 2020, women controlled a third of total U.S. household financial assetsâwhich amounts to more than $10 trillion today. In the next three to five years, $30 trillion more is expected to shift into the hands of women.

The implication for the advisory industry is clear: Any financial professional who isn’t thinking daily about how to better meet the unique needs of women, simply isn’t paying attention. The economic strength of women in our country today is profound and growingâand those that ignore this do so at their own peril.

Thatâs why we studied over 1,000 women who are members of the HerMoney community. They range in age from 18 to 75 (57% are between 45-64), most are college educated and employed full time. Two-thirds are married or partnered and two out of five have children under the age of 21. Both the size and diversity of the HerMoney community enabled us to gain a fresh post-pandemic perspective on womenâs relationship with money.

Women Are Taking Charge of Their Financesâ¦

Even better, nearly three-quarters of women (73%) know what steps to take to build their retirement nest egg. Itâs a clear priority for many women, as over half (55%) are saving at least 15 percent of their income for retirement. Even among women who have less than $100,000 in annual household income, retirement saving remains a clear financial priority; 83 percent are making contributions and more than a third (36%) are saving over 15 percent of their income.

Most women are also taking charge of their householdâs finances. Among those in relationships, nearly six in ten women (59%) hold the primary responsibility for managing their household finances and roughly half (48%) manage retirement planning for themselves and their partner.

When it comes to love and money, most women prefer to keep the two separate. Among women who are partnered, only one-third (33%) have completely merged their finances with their significant other. Among those who are currently single, only 2% say they would merge all their money with a spouse or partner in the futureâevidence that this trend has staying power.

Clearly, women have earned the title âMs. Independent,â as even those in relationships take on more financial responsibility than their partners.

The implication for the advisory industry is clear: Any financial professional who isn't thinking daily about how to better meet the unique needs of women, simply isn't paying attention...

On average, women who share money management duties with their partner take more than half of the responsibility for household finances (55% of the work), investments (54%), and retirement planning (55%).

This dispels an old belief that women are only the CFOs of the day-to-day household but are somehow absent when it comes to investing and planning for retirement. In reality, women have more to lose because they are more likely to live longer, traditionally get paid less, and therefore realize they need to stretch their retirement income further to avoid the risk of running out of money.

However, Most Women Worry about Their Financesâ¦

When asked what stresses them out the most about money, one third (34%) say competing financial priorities, and nearly the same say not having enough money saved (32%). Younger women are significantly more likely to say not earning enough is their biggest financial stressor. However, once women pass the age of 55, their top concern becomes not having enough saved.

â¦And Worry About Running Out of Money in Retirement

When examining womenâs top concerns regarding retirement and retirement planning, the two biggest concerns are the impact of healthcare costs (54%) and running out of money (52%).

In all three chapters of our research, one takeaway was abundantly clear: Women are looking for solutions to alleviate their concerns about running out of money. Despite knowing what steps to take to build their retirement nest egg, less than half (47%) know how to make their money last throughout retirement. Itâs not surprising then that over half say running out of money is one of their top two concerns, including 46 percent of the highest earning women.

Strikingly, when it comes to retirement, we found that more than half believe they will need at least $3 million in their nest egg to be comfortable â a figure significantly higher than the oft-cited $1 million figure. 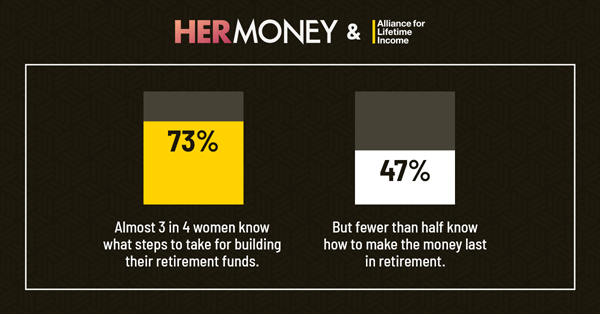 The More Women Know, the Less They Worry

The good news is that our research offers a simple blueprint for reducing womenâs financial worry: knowledge. Specifically, thoseÂ who say they know the steps it takes to build wealth, make it last and create a retirement income plan worry significantly less than those who say they donât:

The data is equally clear that certain behavioral, investment and career milestones further alleviate stress. Achieving a significant investment amount (43%) and having a pension or investing in a product that provides an income for life (40%) commonly reduced worry among women.

So, what are we to make of these findings?

In a nutshell, after years of debating the effectiveness of financial education, itâs clear that it gives us peace of mind so we can stop worrying. Women today are engaging and taking more control of their finances, not just managing the household budget, but doing the investing and planning for retirement. The real work now becomes the business of creating a financial life that will serve us not just for years, but for a retirement that could last decades.