from The November Advisor

The retirement plan to spend-it-all 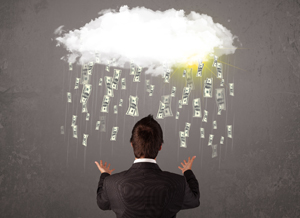 Dr. Riggs is the author of Build Wealth & Spend It All, Live the Life You Earned (November 1, 2014), which shows how almost anyone can use three basic concepts to build wealth regardless of their age. While establishing and managing his private practice, he developed and managed his own commercial real estate portfolio. With his self-taught knowledge of real assets versus liabilities, economic cycles and demographics, Dr. Riggs was able to build successful careers in the residential, commercial, industrial and resort asset classes by staying ahead of the national economic trends. For more information, please visit, www.buildwealthandspenditall.com.

Part III in a three-part series

Your money in the bank or brokerage account is electronic money, a series of ones and zeroes, and nothing more than just IOUs provided to you for your past work, time and effort. These IOUs not yet converted into enjoyable spending or gifting are your uncompensated past work, time and effort. The challenge you will face will be if and when to reverse course and start redeeming all those earned electronic IOUs with enjoyable spending and rewarding gifting.

The traditional approach to retirement savings involves a conservative strategy of a recommended allocation of capital to stocks, bonds and cash, with a 3%-4% annual withdrawal rate. Most traditional estate planning seeks to preserve your net worth up to and usually beyond your life, with the remainder being distributed to your heirs.

The annuity approach advocates selling assets and purchasing annuities and numerous other insurance products to theoretically guarantee a lifetime income stream and protection against future calamity. A lot of very bright people spend a lot of time, money and computing power to build actuarial tables which insurance companies use as a guide to construct those annuity payout schedules to virtually guarantee that some of the initial premium plus the investment earnings will be left over for their shareholders. In this scenario, you will die with an annuity and insurance policies, but you will never really ever get to spend or gift all that you have earned and saved in life.

Then there is the adventurous and, perhaps, scary âspend it allâ philosophy that turns the insurance salesmanâs closing line upside down and asks the question: âDo you want your money to outlive you?â Seven former U.S. Presidents have died penniless.

When my will is read it will begin with the statement: âBeing of sound mind and bodyâ¦I spent it all."

âSpending it allâ is a voluntary, strategically planned, semi-impoverishment very late in life, after having experienced the thrill, enjoyment and satisfaction of piling up a respectable net worth and then converting every last cent into spending and gifting while still alive and able to enjoy it.

With premortem gifting, you can enjoy giving to your choice of deserving individuals or charitable causes while you are still alive to enjoy the pleasure and satisfaction. You can gift to your children when they have the greatest need and can benefit the most from your generosity, whether it is for their advanced education, their wedding or their first house, rather than having them receive the inheritance by default when you die and they are middle-aged adults.

While alive, you can control the amount, the timing and the outcome of your generosity better than you can from the grave having left behind a document for your heirs to contest and their attorneys to manipulate. Sometimes the best gift one can leave behind is nothing for the grieving family to fight over.
The âSpending It All Converting Curve,â as in converting your past work, time and effort (net worth) into enjoyable spending and meaningful gifting illustrates the process.

By applying your work, time and effort to building a pile of net worth, you slowly climb the curve. This is a process of using your income to build up your net worth. You descend the other side of the curve by converting your earned net worth into enjoyable spending and satisfying gifting.

Assigning a date for the peak transition from building net worth to spending net worth and determining the degree of downward slope is a decision for each individual based on factors such as age, health, family history, life expectancy, oneâs concern over leaving hard earned money behind and oneâs tolerance for being almost broke before being dead.

By keeping the last, mortgaged, income producing property, you can still have a passive income stream without giving up control or custody of your capital. Because your cash-on-hand (an asset) could equal your outstanding mortgage (a liability); you will be insolvent, technically broke, but still liquid and not destitute. When you die, the cash-on-hand will pay off the outstanding mortgage so you will not only have spent everything you earned in life, but you will also have paid off all your bills without bouncing the last check to the undertakerâ¦donât stiff the undertaker.

You need to ask yourself, do you want to be the patient in the nursing home with the most money or the greatest memories? Would you rather be broke and have rich memories or be rich and have broken dreams.

When my will is read it will begin with the statement: âBeing of sound mind and bodyâ¦I spent it all.â