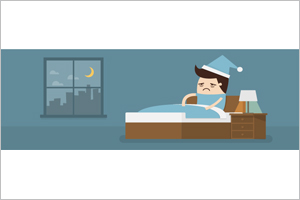 AUSTIN, Texas, April 28, 2017 /PRNewswire/ — Sixty five percent of Americans are losing sleep because of money, according to a new CreditCards.com report.

The most common worry â expressed by 38% of Americans â is health care or insurance bills. Thirty seven percent lie awake fretting about saving enough for retirement, 34% because of educational expenses, 26% over mortgage/rent bills and 22% due to credit card debt.

Health care and educational expenses are the only categories in worse shape now than during the Great Recession. Concerns over health care costs have spiked over the past year (up nine percentage points).

Gen Xers are the most concerned about health care expenditures and saving for retirement. Millennials are the most fearful about outlays for education, housing and credit card debt. These issues are cutting into the slumbers of 73% of Gen Xers, 71% of millennials, 59% of Baby Boomers and 48% of the Silent Generation.

People who are losing sleep over money aren’t taking it lying down: 82% reported taking at least one step to improve their financial situation over the past year versus 54% of those who aren’t losing sleep. The most common action the insomniacs took was to reduce expenses, followed by selling something, signing up for a new credit card and taking on a second job.

“People lose sleep when things feel out of control,” said Matt Schulz, CreditCards.com’s senior industry analyst. “Take back some of that control by taking action. Even small moves like making a budget, selling something of value or trimming expenses can make you feel empowered and help you sleep more peacefully at night.”

The survey was conducted by Princeton Survey Research Associates International. PSRAI obtained telephone interviews with a nationally representative sample of 1,000 adults living in the continental United States. Interviews were conducted by landline (500) and cell phone (500, including 308 without a landline phone) in English and Spanish by Princeton Data Source from April 6-9, 2017. Statistical results are weighted to correct known demographic discrepancies. The margin of sampling error for the complete set of weighted data is plus or minus 3.8 percentage points.

Excerpts from the Financial Insomnia Poll: