Forbes Health surveyed 2,000 U.S. adults conducted by OnePoll to discover the fears people experience when it comes to aging. This includes which concerns people worry about the most and the preventative measures people are taking. View complete survey findings here. 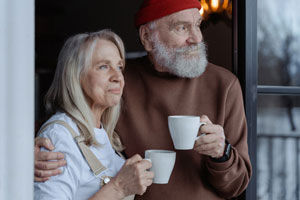 Aging is an inevitable and sometimes daunting part of life, but according to a recent Forbes Health survey of 2,000 U.S. adults conducted by OnePoll, 53% of people arenât afraid of growing old. In fact, people seem to fear aging less with each year they grow older.

However, many aspects of the aging process do seem to be cause for concern. According to the survey, 63% of U.S. adults who said they fear aging are worried most about potentially declining health as they age, followed by losing loved ones (52%) and financial concerns (38%). Meanwhile, 30% of respondents noted a fear of loneliness and/or isolation as they grow old, and 20% worry about feeling bored or a lack of purpose as they age.

Itâs no surprise that a personâs overall health tends to decline as they get older, but not all health concerns are created equal when it comes to what people worry about most. According to the survey, 45% of U.S. adults who said they fear aging are most concerned about potential mobility issues, such as arthritis and joint deterioration, followed closely by cancer of any kind (44%) and cognitive decline, including all types of dementia (44%). 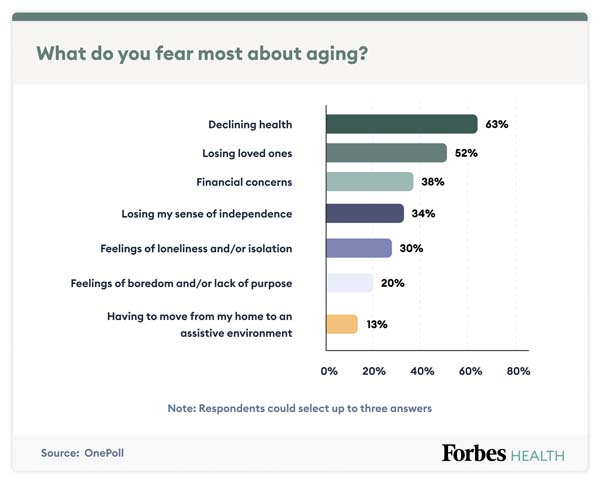 A majority of survey respondents take proactive and preventative measures to maintain their health in ways that also protect their sense of independence. For instance, 49% of adults play brain games to stimulate the mind, and 47% make a clear effort to stay socially engaged with family members, friends and their community. Nutrition and fitness appear to be high priorities as wellâ46% focus on eating a balanced diet, and 44% make sure to engage in regular cardiovascular exercise, such as walking or jogging.

The Costs of Care as You Age

As people age, they tend to require more frequent (and sometimes more intensive) medical care. Fortunately, 74% of adults surveyed feel confident in their ability to access the medical care they need as they age. Paying for this care, however, is a different story.

According to the survey, 63% of adults are concerned about being able to afford the medical care theyâll need as they age. This fear is most prevalent among adults ages 42 to 57, worrying 70% of those surveyed.

These strong financial concerns exist despite the fact that 87% of all adults surveyed are currently covered by some form of health insurance. Among those ages 65 and up, 97% are enrolled in a Medicare plan, the majority of which are enrolled in private Medicare Advantage (Part C) coverage instead of Original Medicare provided by the federal government.

While affordable (and high-quality) health care remains a consistent pain point in the U.S., older adults donât seem to be approaching their later years with a âcome what mayâ attitude. Instead, many appear to be taking clear steps to protect their health, which can help reduce their needs for more significant medical interventions down the line and help them enjoy their overall health longer. Better yet, these actions arenât motivated by a fear of aging, which can be a boon to their mental and physical health as well.