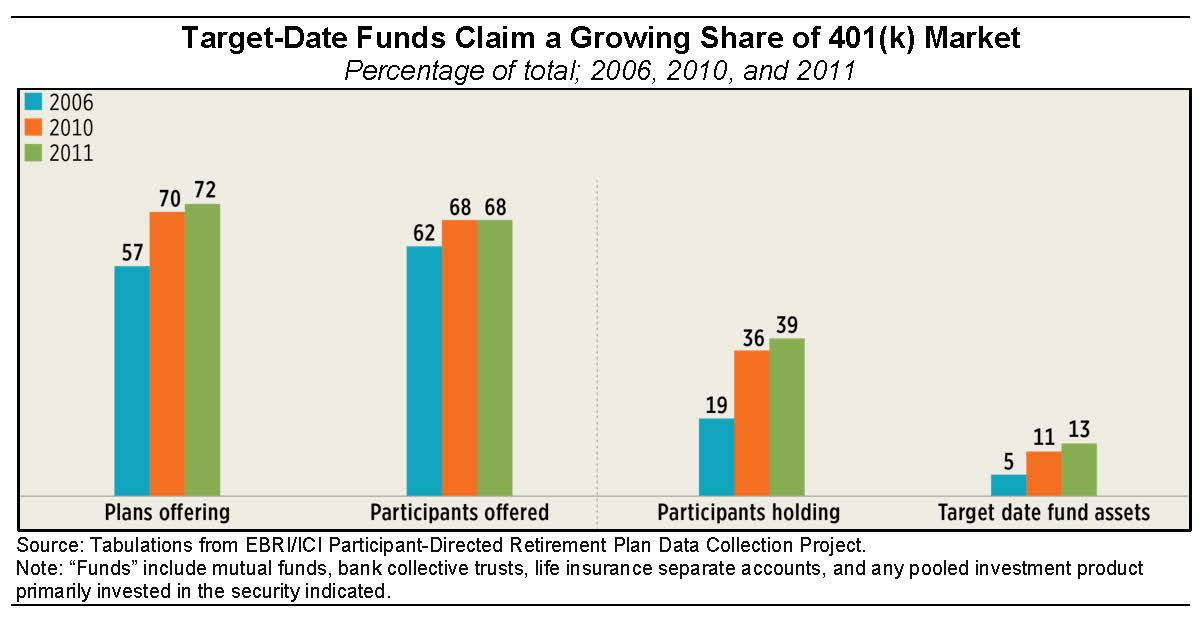 WASHINGTON, DCâ401(k) savers continued to seek diversified portfolios in 2011, with 61 percent of 401(k) participantsâ assets invested in equity securities and 34 percent in fixed-income securities, on average, according to the annual update of a joint study released today by the Employee Benefit Research Institute (EBRI) and the Investment Company Institute (ICI).

âWhen planning their retirement savings strategy, participants increasingly use tools such as target-date funds, which are designed to offer a mixed investment portfolio of equity and fixed-income securities that automatically rebalances to be more focused on income over time, to get diversification,â said Sarah Holden, senior director of retirement and investor research at ICI and coauthor of the study. âThe studyâs findings highlight that 401(k) participants, particularly recent hires, are opting to diversify their account balances, either actively or as a result of plan design.â

When planning their retirement savings strategy, participants increasingly use tools such as target-date funds, which are designed to offer a mixed investment portfolio of equity and fixed-income securities that automatically rebalances to be more focused on income over time, to get diversification

At year-end 2011, the average 401(k) participant account balance was $58,991 and the median (mid-point) account balance was $16,649, with wide variation reflecting the many variables in retirement saving, including participant age, tenure, salary, contribution behavior, rollovers from other plans, asset allocation, withdrawals, loan activity, and employer contribution rates.

The full analysis is being published in the December 2012 EBRI Issue Brief and ICI Research Perspective, online at www.ebri.org and www.ici.org/research/perspective It was written by ICIâs Holden; EBRIâs VanDerhei; Luis Alonso, EBRI director of information technology and research databases; and Steven Bass, ICI associate economist, based on the EBRI/ICI database of employer-sponsored 401(k) plans, the largest of its kind and a collaborative research project undertaken by the two organizations since 1996. The 2011 EBRI/ICI database includes statistical information on about 24 million 401(k) plan participants, in 64,141 plans, holdingÂ  $1.415 trillion in assets, covering nearly half of the universe of 401(k) participants.

EBRI, established in 1978, is an independent, nonpartisan, nonprofit organization committed exclusively to data dissemination, policy research, and education on economic security and employee benefits. EBRI does not take policy positions and does not lobby. www.ebri.org